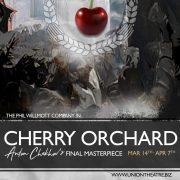 With a new version of The Cherry Orchard transposed to the time of the 1917 Russian revolution, director Phil Wilmott’s aim was to reflect “our current edgy relationship with Russia,” he tells us in his notes.

That is quite an ambition, given the escalation of tensions following the use of a nerve agent in Salisbury and this production is more about the edgy relations within a particular society than hair-raising international sabre-rattling.

The production draws out many of the strengths of what Wilmott tells us is his favourite play, with its natural delivery of countless truths and exploration of the comedy and the pathos of life as it ends or loses meaning for some and for others is just beginning.

But the result, though not exactly cosy, stops short of the startling; the violence of revolution doesn’t sit easily with the less decisive tone of Chekhov’s more nuanced greatness, written when the forces of revolution were only beginning to amass.

What survives is a sense of a sprawling aristocratic family and its hangers-on lazily uttering whatever inconsequential thoughts come into their heads, clashing head on with the angry young Bolsheviks and exasperatingly spendthrift to the rising bourgeoisie.

Holding it all tenuously together is Suanne Braune as Ranyevskaya, the matriarch and landowner, who as a giving, feeling human being is the closest the play has to a sympathetic character.

She is flawed, but emotionally generous and she has a genuine excuse for her sentimental attachment to the cherry orchard.

Those around her tend to be less adequate as characters and actors.  Richard Gibson is Gaev, her hopeless brother, forever eating sweets from a crumpled paper bag in denial of adult responsibility and the bitterness of life.

The next generation is represented by Lucy Menzies as a somewhat characterless, blond, indulged daughter Anya and, in total contrast, Lakesha Cammock as a spiky, dark adopted daughter Varya.  She denies and is denied whatever emotional satisfaction Christopher Laishley as the son-of-a-serf-turned businessman Lopakhin could possibly give, while Anya embraces the revolutionary Trofimov (Feliks Mathur) with hardly a second thought for the doomed orchard and all it represents.

One change to the text Wilmott did not envisage was dropping the part of Fiers, the family’s octogenarian footman.

He was forced into the decision when actor Robert Donald broke his hip, meaning real-life misadventure robbed the production of the full cruelty of Chekhov’s ending.