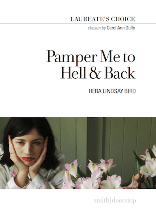 Hera Lindsay Bird certainly has a knack for choosing attention-grabbing titles. She’s not a fan of the one word hook though. The downside of a great title is the need to ensure the poem fits it. In “Everything is about to go wrong forever”,

A simple idea, bad omens, is taken to its extreme, the narrator’s death. A string of images is built up to support the logic: discounts on knives, a single glove that happens to be wet and human-coloured. The sensitivity suggested in ‘I can feel each one strike’ is lost in ‘they say at my funeral…’ A change of mood is signalled in the change from end-of-line ‘o’ assonances (‘omens’, ‘emporium’, ‘mouth’, ‘stone’, ‘moon’) when the narrator moves from whimsy to more concrete examination of reactions to her own death. But in Bird’s more successful poems, there is a greater degree of logic and substance behind the seemingly casual, discursive tone.

Near the end of the book there seems to be a companion piece to the above poem, entitled “I have come back from the dead to tell you that I love you”. Like the first quoted poem, its energy lies in the accumulated layers of images, which are striking and fit the context.

It’s a shame, however, that the pamphlet opens with “Bruce Willis you are the ghost”,

Of course it’s not Bruce Willis, the actor, who is the ghost, but his character, Dr Malcolm Crowe. But a title, “Dr Malcolm Crowe you are the ghost” would need a footnote or have readers turning to a search engine. Bruce Willis works better in the title, but a poem is not just its title, and mismatch between title and poem irritates. A more skilled poet would have overcome this.

“Untitled 404” is after a Cindy Sherman photograph,

The original photo shows a woman in a blue blouse with a teddy bear peering over the arm lock it’s being held in. The blouse is a shiny, fussy style and the bear looks like a dark stain. The woman’s face is a vacant pose and feels unnatural. Bird cleverly uses the photograph as a launch for musings around reactions to the photographer and what it means to be a woman: the policing of appearances, the pressure to conform to someone else’s ideals of what a woman is or is not.

Carol Ann Duffy is quoted on the pamphlet’s back cover, “Without doubt the most arresting and original new young poet – on page and in performance – to arrive.” I don’t think this hyperbole does the poet any favours. A couple of her earlier poems went viral on social media and this sort of thing divides the readership into fans or not-fans and loads the poet with the expectation she’ll just write more of the same. I think Hera Lindsay Bird deserves better and her work holds more complexity than the love it/loathe it dichotomy. When an idea isn’t stretched enough, her poems can fall flat. When Bird spirals her focus outside that of the poem’s ‘I’ then I enjoy her talent and energy.