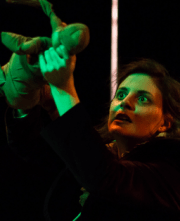 “Frankenstein” at the Space Theatre

Isabel Dixon of Burn Bright Theatre has dramatised Mary Shelley’s Frankenstein two hundred years after its first publication, with two women as its protagonists, Elizabeth Frankenstein and the creature, played by Danielle Winter and Elizabeth Schenk.

All other roles are played by the ensemble cast, who also use movement, song and puppetry with a level of skill and versatility which reminded me of the achievements of Theatre de Complicite.  Simple props – a chest, a length of rope, some boxes and lanterns – are deployed to create scenes set as far apart as Geneva, London, Scotland and the frozen Arctic Sea.

Switching the sex of the leading characters refocuses the work on the love between parent and child, rather than the romantic attachments which are at the heart of Shelley’s version, but Dixon is faithful to the original in most other respects.

Shelley’s tragedy tells of the catastrophic consequences of pursuing intellectual ambition divorced from humanity.  Her genius resided in moulding a truthful, affecting story from her lurid material, which must have had something to do with living a life ravaged by loss.

Any reworking of Frankenstein faces the enormous challenge of moving the audience without descending into Grand Guignol.  The Burn Bright cast inspires pity and terror without ever crossing the line.  Although the production is rich with many other rewards, I recommend it to Londongrip’s readers for this reason alone.

Frankenstein is on at The Space Theatre, Westferry Road, E14 3RS until 10th March  https://space.org.uk/

It is a Burn Bright Theatre Production http://www.burnbrighttheatre.com/