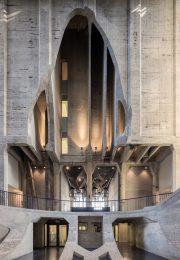 Since September, 2017, its recently-developed Silo District has been home to the Zeitz Museum of Contemporay Art Africa, MOCAA for short, a giant silo of post 2000 art by the artists of Africa and its disapora, assembled by German entrepreneur Jochen Zeitz.

For a white visitor, it’s an epic, breath-taking, unsettling feast; unsettling not least because every visitor on the day I went was also white, as is Zeitz, the former CEO of Puma, and because it feels as if we are the chosen audience for works that amount to a “cri de coeur” and at times a diatribe about the traumas caused by colonialism.

There is humour, joy and defiance – and there is devastation, oppression, violence, abuse of power, by men over men and men over women.

I began my visit in the transportation tunnels in the silo’s basement, from whence the grain used to be shipped – a suitable place to be weighed down by dread.

Theoretically, the exhibition there – Luanda, Encyclopaedic City – ended in January, but it has spilled into February.

The work of Angolan Edson Chagas, it comprises 23 stacks of images from his photographic series Found Not Taken and is the first exhibition of the installation since it won the Golden Lion at the 2013 Venice Biennale.

Anyone who wishes can take the posters of broken furniture and ramshackle buildings in brutal, urban settings, and assemble them in their own order.

There’s an appropriate irony: the attendant sitting at a table with a pile of “confiscated posters” because one visitor had attempted to grab the lot.

It is of course a very African lightning bird, whose prime associations are masculinity and violence, but it’s hard for a visitor from London not to draw comparisons with Louis Bourgeois’ giant spider Maman, which once filled the Tate Modern’s Turbine Hall, as we look up at enormous wings in a cathedral-like industrial space carved out of the silo’s heart.

We can glimpse Hlobo’s dragon again and again as we take the lift or the winding spiral stairs through floor after floor of the more than 6,000 square metres of exhibition space.

One response is that things are rarely equal, especially in Africa.  Another is that the works are all given equal dignity as glorious explanations of what it is to be another human being – or to quote the museum’s Executive Director and Chief Curator Mark Coetzee: “If we understand each other better, which is really what art does, we create a world we all want to live in.”

Just as the basement exhibition demands no particular order, the works of “All things being equal” bear up to random viewing.

I started, I think, at the beginning with Jody Paulsen’s “Here to Stay”, a fun felt thought collage of phrases such as “Highbrow Gameplan”.

Paulsen says he is not political.

That can only be true in so far as any modern African art can possibly ignore its context and, if there is a trend, as you navigate your way through the galleries and up the spiral staircases, it is the cumulative sense of politics, stacking up like the grains of the past.

Just along from Paulsen, another South African artist Athi-Patra Ruga, has a more daring, political edge he places a Godiva-like figure comprising pink fishnets, heels and balloons on a zebra in a series entitled the Night of the Long Knives, full of dream-like luminosity and menace.

U.S.-based Frohawk Two Feathers’ approach is subtler in presentation, but the politics are still overt as his old-style maps and 18th-century officers parody what he dubs the Frenglish empire.

Julien Sinzogan, born in Porto Novo, the capital of Benin that served as a hub for slave trading, also takes us into some of the worst of the colonial past.

Bon Vent a Tous juxtaposes traditional African boats with tattered sails and mighty galleys, while La Jetee (The Jetty) shows line after line of shackled slaves about to be led away to row.

If you feel a need for some art for art’s, not politics’ sake, Ghanain artist El Anatsui almost provides it, though it would be wrong to deny the resonance of an artist who has spent so much time transforming the materials colonisers introduced.

World-renowned for lavish hangings made of aluminium bottle tops, The Circular Series is both related and a departure.  He creates mysterious, metal, moon-like discs by taking prints from a wooden table marked by years of labour.

Kenyan artist Wangechi Mutu’s work is often violent but she can also be lyrical.

An installation “Poems by my great grandmother” is made from a root and a skull, but the animal and the plant are long dead and their remains rotate gently and hypnotically in shadowy light.

We’re brought back to the brash present with South African Frances Goodman’s Ophiophilia – a seething mass of snakes made from acrylic nails for a double-cringe factor.

Then, another South African woman artist Lungiswa Gqunta delves into the struggles of living memory fought with weapons made from everyday objects.

A diptych of matches, paper and petrol explores the statement: “Together hand in hand, with our matches and our necklaces, we shall liberate the country.”

Nearby hangs “Divider”, made up of beer bottles, hung on ropes like nooses or wicks, ready to be ignited.

The most strident, theatrical take on Africa’s violent history is the work of Kudzandai Chiurai of Zimbabwe in an exhibition entitled Regarding the Ease of Others that runs until March 31.

Now Mugabe has gone, this scathing critic of the regime has added contemporary force.  He is a fearless articulator of the assertiveness of a new generation of men and women, flexing their gleaming muscles of power.

The dark world he depicts is stalked by death, shot through with religion and its antithesis, and in it, women, in trouser suits, dress shirts and killer heels, may be as ruthless as the men.

If it all becomes too much, there are still antidotes of a kind to be had.

Following on from a distinguished line of macho male artists, crowned by Picasso, who were in thrall to the bull, she gives us a female take on the epic struggles of man and beast, which are at least as culturally significant in Africa as in Iberia and Latin America.

In Portuguese-occupied Mozambique, the “Praca de Touros” was where black Mozambicans fought for the entertainment of the Portuguese and it is where Mntambo portrays a female bull-fighter, dressed in cow hide but with no actual bull to confront.

After that we wander past sculptures made from the tails of countless dead animals and at hanging rows of hide dresses redolent of the female forms they might adorn, of historic, colonial dress and of the animals the skins should be covering.

If you have the emotional energy, British-born NigerianYinka Shonibare’s work is in residence until May 28 in the Dusthouse, which filtered the air of the adjoining industrial structures to protect the workers and prevent the buildings exploding.

Her version of “Addio del Passato” tells the story of Lord Nelson’s rejected wife set to the music of Verdi, while we look down over four floors of stained glass windows and ponder colonial pyrrhic victories and in Cape Town, recall the true heroism of another Nelson: Mandela.

At last we emerge on to the roof to views of Table Mountain and a terrace of course occupied by art in the form of an “intergenerational dialogue”, Now and Then, on display until August 27.

Togo-born artist El Loko, who died in 2016, created a “cosmic alphabet”, meant to communicate across any barrier.  It is inscribed on to glass discs that make up the roof terrace floor on which stand living South African sculptor Kyle Morland’s abstract metal sculptures.  They are made of discarded material in one more reminder that traditional aesthetic hierarchies are overturned.

Breathe in the view and the atmosphere and then whizz down through the shoot-like lifts or take the twisting staircases, then pause before the gift shop for a last look at Zimbabwean-born South African Michele Mathison’s triptych in burnt wood of a devastated, apocalyptic Bushveld. 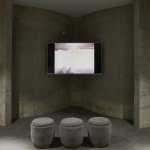