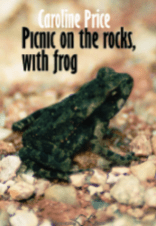 The magic of relationships and encounters unfurls in the graceful flowing poems of Caroline Price’s latest collection. There is the uncertainty of being ‘there and not there’, and the remnant of what life once was – solid and real – but is now erased. The title of the collection itself, the name of one of the poems, confirms the idea of a frozen memory but still unsettled, in flux.

The world is suspended, though observed in details in its absurdities, contradictions and transformations, which, nevertheless, enchant and attract. As in the case of the ‘tiny / rose wood box’ offered as a wedding present,

A field covered with snow in Azincourt induces a meditation on writing:

and the stick that was used to mark the snow is ‘jammed in earth…quivering’. The uncertainty and insignificance of human acts, their inevitable obliteration, do not eliminate the charm and importance of performing them, which is testified by the poem itself.

There is a sense of loss, a death drive lingering uncannily in the ‘search of something out of the ordinary’; the owl whose ‘talons clasped his flesh…the pain, pincers, thumbscrew, flail / in his head as it settled more comfortably’. The pain happens, but it is also chosen and observed, as in ‘Identity’, where Virginia fills her pockets with stones and walks into the water. Furthermore, the loss of a friend or a lover is never definite, he comes again to visit; his presence is disturbing in the ordinary setting of a family picnic:

Or, again, in ‘Disappearings’, where premature death gives the sensation that ‘everything disappears’, the lost one forces her way to reality, ‘indifferent lights’ of a world ‘that continues without you’.

In ‘Picnic on the rocks, with frog’, during the ‘last spring…of four springs’, a character shows his caring nature in rescuing the froglets; yet the incident reveals not only his care but also the presence of ‘surface tension’. This restlessness is not only exposed in relationships but is also reflected in nature, a tension between an apparent superficial calmness, mirrored in the attentive gaze of the observer, and the disturbing happenings:

Similarly in ‘The Slack-Jawed Girls’ the carelessness of having ingested radium by touching wisps of their own hair with ‘saliva-wetted lips’ is unexpectedly dooming and in contrast with the innocence of the gesture. As innocence and brutality go side by side, the same happens with destruction and renewal (‘Fireweed’) or abuse and pleasure (‘Poison’).

Irony unfolds in the elderly lady’s enthusiastic discovery of Greek myths, ‘and women / from the beginning blamed for everything…’; then the bus arrives in the rain and the viewer is ‘swept across the road in a tide / of mortals’ (‘23 to Liverpool Street’). In a ‘loud’ funeral with carriage and black-plumed horse, black limousines and outsize lilies, the old widow in turquoise coat comments on the waste of the horse’s dung, ‘he would have liked that / for his petunias’ (‘A quiet man’).

Love and despair are evoked by the sight of the wedding dress at Forca del Frascola (Prealpi Carniche, north east of Italy) with grains of rice still stuck in its creases; the viewer looks for a final meaning, a plausible interpretation that does not come. The recurring image of vultures (as well as owls) brings a sudden violence in the emptiness and silence that lingers before and after them; an undeniable presence that needs to be acknowledged just as much as the ‘wild hope…rare and shy’ that arises at the sight of ibex on a mountain ridge. The garden in a summer night is suffused by the ‘tiny mandibles’ of moths and a fox that ‘enters the moon / and stops’; the weather vane points ‘at that’, mysteriously and uncertainly.

No certainties are given in the impeccable smooth flow of enjambments of Caroline Price’s poems, but invaluable suggestions and allusions, and a constant unquenchable interest in human peculiarities.

The Hippocrates Book of the Heart Zeitz MOCAA, Cape Town, by Barbara Lewis.