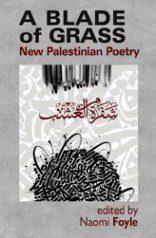 A Blade of Grass

Alan Riach tells an interesting story of how, when a young man, he made a pilgrimage to visit the famous Scottish poet Hugh MacDiarmid in his cottage in Biggar. The two men bonded over whisky and a shared love of Charles Montagu Doughty. At a certain late stage in the conversation, MacDiarmid’s wife Valda entered the room to say ‘I can’t talk with you both about Victorian epic poetry but would you like a fried egg or bacon roll?’ to which MacDiarmid’s instant response was ‘Well, you’ve only got ignorance and laziness to conquer’.

I feel that we all, or at least most of us in Anglophone parts of the world, have laziness and ignorance to conquer when it comes to giving our attention to the situation (too weak a word, Naomi Foyle refers to it as the ‘catastrophe’) in Palestine and the diasporic poetries that come from its many deracinated poets. This anthology is not only patently worth its cover price for the poetry it collects and in many cases lovingly translates, but also for the deeply researched introduction by Naomi Foyle. This introduction is also a profound meditation on belonging, alienation and homelessness, and on how ‘poetry is thus always most popular in countries whose people suffer the worst forms of oppression’. Foyle deals sensitively with the thorny issue of how Palestinian poetry can be effectively rendered into English, which is in itself a tongue heavily freighted with colonialist, expansionist and imperialist associations. The overall goal of the collection is to find solidarity, creativity and peace amid the suffering, and these are not nebulous abstract nouns thrown around easily. Foyle’s detailed explanation of the history of the conflict is an eye-opener to any reader like myself who only has a superficial understanding that is sympathetic towards the Palestinian cause.

Naturally many of the poems here are polemical, but not, I think, contentious and I am pleased to see Foyle has the courage to write about issues that I had been troubled by, but did not feel qualified to speak of, such as the ‘huge narratological disparity in the conflict’:

I have for a long time held this view myself, but have been fearful to air it because of the readiness in the UK to conflate views critical of Zionism with anti-Semitism. I suspect that many people like myself, in the West, are timid about any involvement, even as a reader of poetry, in anything that seems to be taking sides. This is regrettable and should not be allowed to cast a shadow over the anthology itself, which offers a rich cross-section of Palestinian poets from across the globe. Reading these poems has got me thinking that so much poetry in English that I usually read conforms to Western forms of story-telling and narrative, where the author is the owner of the mystery and the story, guiding the reader very firmly by the hand. Poetry in Arabic that I’ve encountered in English is much freer and less regimented, and this is striking when you consider the long experience of oppression most of these poems deal with. The reader is allowed to enter poems and move around in them, being startled all along by unforgettable images:

Some of the poets here are presently imprisoned in Saudi Arabia and Israel (Ashraf Fayadh and Dareen Tatour) on charges relating to the freedom of expression in their poetry. This gives the anthology an undeniable urgency and invests it with life-and-death authority. Fayadh’s poems particularly dwell on issues of freedom and captivity and often take an epistolary form, of letters smuggled out from behind bars. As Fayadh has a visceral sense of what it is like to have your liberty taken away from you, it is no surprise that his poems take a jaundiced view of the ease with which we use big words like ‘justice’, ‘love’ and ‘freedom’. By contrast, Tatour’s poems are much more of a rebel yell, or clarion call. Here are some lines from the incendiary ‘Resist, My People, Resist Them’:

Similarly, Naomi Shihab Nye uses poetry as a way of illuminating and cataloguing the horror of a constant state of war, and the way news and reportage is complicit in covering up crimes against humanity, as in ‘Thirsty’:

As would be expected, many poems are angry and deal with the loss of land, home and life, such as Marwan Makhoul’s work, which takes the form of an interrogation at an airport. Others choose a different, even more haunting tack, such as Fady Joudah’s exquisite ‘Mimesis’ which shows how living for many generations as someone displaced seeps into the very essence of a person and their being, but not only that, it filters down into the newly born and the unborn:

All of these poets and their poems I am encountering here for the first time, with the notable exception of the late Mahmoud Darwish (1941-2008), whose posthumous reputation looms large over this anthology (it’s dedicated to his memory) and even includes a handful of his poems. These are mostly prose poems that often have a sting in the tail or a closing image that enables them to soar, such as the last lines to ‘Beyond my identity’:

Ultimately, at least for this reviewer, the most memorable poems here are not the ones that protest loudly, but are the ones that tackle the immense gaping wound of a conflict through small things or objective correlatives that we can all easily relate to, such as Joudah’s poem above, or the namesake image for the collection – a ‘blade of grass’. These poems help the global reader to begin to have some idea (for what is happening in Palestine and its diaspora can never be understood in logical terms that all of us can relate to) of what it must be like to live in exile. Mustafa Abu Sneineh uses imagery relating to bees and the collapse of a hive as well as an ant, a creature renowned for its ability to carry far in excess of its own body weight. Sara Saleh also uses the image of a spider and its web:

In the spirit in which I began this review, I urge anyone reading this to conquer their laziness and ignorance and track down a copy of A Blade of Grass.