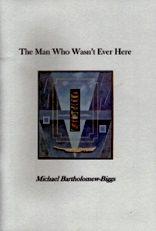 Carla Scarano D’Antonio reviews Michael Bartholomew-Biggs’s poetic sketch of a family history which is based as much on imagination as on evidence.

The story behind this collection starts when the author searches for some records of his Irish grandfather, who died in a ship explosion in the Indian Ocean in 1917. His twelve months research was apparently triggered by the practical wish to obtain an Irish passport, and emotionally influenced by the IRA attack at London’s Canary Warf in 1996.

‘The man who wasn’t ever here’ is the author’s grandfather, Thomas Ovans (later anglicized as Evans) who left Ireland at an early age and moved to England. He was born in County Leitrim in the 1850s and worked in shipyards in Middlesbrough where he married a butcher’s daughter, Bertha Hudson.

By visiting his granddad’s birth town, Kiltyclogher, drinking Guinness with the locals and visiting the church where Thomas was christened (his Baptism certificate was the final document required to prove his grandfather’s Irish birth), the author revives his connection with his granddad and with Ireland. After the distress triggered by the IRA attack – where once again the bomb hit ‘someone else’ – he is in search of roots and meaning.

The history Bartholomew-Biggs traces is not part of ‘History’ – the one concerning eminent statesmen and national heroes – but a private history of ordinary people, fragmented and incomplete. Nevertheless, it turns out to be meaningful and adventurous, although (needless to say) the lack of concrete evidence means he has to fill some gaps with his imagination.

The story is told backwards. In the first poem, ‘Birthright’, we have an overview of the findings of the author’s research, the little information he managed to collect. But we learn that it did the trick, ‘like Isaac’s kiss’ which allowed Jacob Isaac’s blessing, and secured Bartholomew-Biggs an Irish passport.

After proving his Irish ancestry, the author feels free to retrace Thomas’s life starting with ‘Died from Scalds’ in which his terrible death is ‘condensed to three cold words’. The press reports of the shipwreck are impersonal as well, with some facts and anecdotes. After the boiler’s explosion, the ship sank ‘in only sixteen minutes’, but a gentleman found the time to go back to his cabin twice to collect some money and the watch he had forgotten. And a passenger’s pet dog ‘was saved and reached Bombay before his master.’

Thomas married Bertha in October 1896 but there are no photos or records of their wedding or their life together. So the poet imagines Thomas’s ordinary life beside his wife and, at the same time, recalling his voyages, which he definitely misses. Adventure and romance mix in the evocative rhythm of the last lines in ‘Family Ties’, describing his yearning for a fulfilment he can only find in the limitless ocean, in a boundless openness cadenced by the turbines.

The apparent contradiction between the need for measure and the infinite perspective he longs for is resolved in ‘the salty tang of romance’ he is seeking to give meaning to his life.

During one of his voyages as a ship engineer, Thomas became friends with the Australian opera singer, Nellie Melba. The class and position difference did not seem to bother the diva, maybe because of his charm and good looks that comes across from his portraits. Visiting her at home in a romantic tête-à-tête, Thomas seems to grasp his wish to live in full, but there are still question marks. Will he be allowed to enter the front door or the tradesman’s entrance? Is it important what really happened between them? And after all, isn’t it all a game, the big game of life? There cannot be definite answers, both because there are not enough records of Thomas’s life and because life cannot give definite answers.

The poem ‘Taking Stock’ uses repetition of the first line of each stanza (‘the church was empty in the middle of the day’) with small, but meaningful, variations and it seems to encompass Thomas’s search for adventure and meaning.

Thomas, like the New Testament apostle whose name he shares, questions life, chooses risk; he doubts, but finally believes and follows his destiny.

The final section of the pamphlet is an afterword about the IRA attack at Canary Warf with the addition of two postscripts. More questions arise here with a stronger stress on the themes of immigration and national identity, which run throughout the book, together with the connection to terrorism. Thomas was born in the same part of County Leitrim as Sean MacDermott, one of the leaders of the 1916 Easter Rising; but he did not take part in the struggle for Irish independence as he left the country at a young age. Was he an ordinary emigrant or a runaway, a traitor? Did he care for his country? Was his country Ireland or England eventually? And was MacDermott a hero or a terrorist? The questions remain open and, again, have no definite answers. It can be both, it can be either/or, it is difficult to decide. The small narratives of ordinary people do not allow final solutions.

The postscripts are in Thomas’s voice. The first one addresses the author:

Perhaps these lines address the reader too as we have had our own adventure in imagining and playing with his life and legacy.

The second postscript is dedicated to the author’s wife who was the other inspiration for the research. This witty poem reflects a new and playful aspect of Thomas’s personality as he represents himself as the handsome Irishman who declares his interest in love rather than conspiracy.

This pamphlet offers a pleasant read that touches some paramount themes of our confused, conflicting times.