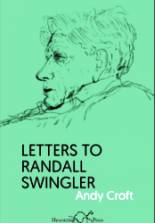 Merryn Williams is doubly impressed – both by Andy Croft’s finely crafted poetry and by its subject, the unfairly neglected writer and activist, Randall Swingler

Randall Swingler (1909-67) was a poet, playwright and left-wing activist, never as famous as other Thirties writers and now practically forgotten. Before and after the war, in which he served with distinction, MI5 followed him around, even on pub crawls, and noted in his latter years that he looked ‘the worse for wear’. Orwell shockingly denounced him to the security services, Spender ‘named’ him in The God that Failed and he was blacklisted by the BBC. You won’t find him in anthologies of 1930s or WW11 poetry.

Andy Croft has already written his biography (Comrade Heart, Manchester University Press, 2003). But he is still obsessed with him, and these four verse-letters, written between 1999 and 2016, bravely attempt to update Swingler’s ghost with the world as it now is. It was also brave to write them in ottava rima, the form made famous by Byron in Don Juan. There are only a limited number of rhymes in English. Like Byron, Croft uses rhymes which are outrageous, and leaps from deadly seriousness to black humour with astonishing speed. The first letter describes his own long struggle to get the biography published:

As one biographer complained, it’s much easier to publish the hundredth book on a given subject than the first. This is a funny but profound meditation on the fact that a few selected poets (and others) get picked out for fame while so many others, possibly just as good, rest in unvisited tombs.

Well, Croft did eventually get his book into print, and it got seven reviews. He informs Swingler (this was in 2002) that the world is suffering from ‘the same old stuff – oppression, hunger, war’, and that the ideals to which he gave his life are considered absurd. He often reminds himself that Swingler is dead and promises not to write to him again, but then does. The miseries of the world are misery to him and he cannot stop warning his readers:

The last letter brings the ghost up to speed with Brexit, Trump and the rise of Fascism in Europe. ‘The monsters that your generation fought/And left for dead have recently escaped.’  He recognises that he is now older than Swingler was, and that he is talking to himself (‘so no change there’). This letter contains some splendid verse, using the metaphor of a snowfall which alters everything:

That is how many people felt about the shocking political upheavals in 2016. It’s idle to say that the world we live in now is better than the one Randall Swingler knew, because so much is still terrifying. The reason why people don’t turn to poetry now (as they did at other points in history) is because it is often trivial, often obscure, and usually doesn’t rhyme. But if you admire wit, passion and verbal dexterity, and even if you are not fascinated by politics, you will enjoy these Letters. This is my poetry book of the year.