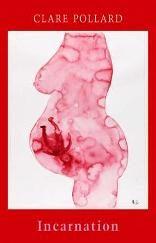 Motherhood is one of the themes in Clare Pollard’s new collection; but the book also broadens out into forceful and compassionate poems about the sorrows of the world into which our children are born.

In case the title and cover picture do not make the point plainly enough, the first poem in Clare Pollard’s new collection confirms that much of this book is about motherhood. Pollard informs us that her own pregnancy began when she was in Jordan in September 2012; and she sets the scene in wonderfully dramatic language:

Then in the moment when “sperm and egg collide” there comes a note of anxiety which recurs throughout the book: ”Yes, this is what the world needs: more of us.” We follow this train of thought through Pollard’s dense introspection while “Pregnant already, I launch / my body into the Red Sea” and then into the splendidly sprawling five page poem ‘Suffer’ which itemizes the many things that might harm a baby. These range from

Pessimism is of course not the only note that Pollard strikes. Motherhood involves pleasant, if sometimes puzzling, experiences and discoveries:

Notwithstanding these very personal examples, the book is far from being narrowly focussed.  Pollard also writes about the lost children of other mothers: she includes an elegy for Amy Winehouse and poems for tragic victims of so-called “honour killings”. ‘The Contradiction’ refers to the still unexplained absence of Madeleine McCann (although we must turn to the Acknowledgements section to discover this connection):

Elsewhere, Pollard’s concerns go well beyond the individual and personal and reach for the much bigger woes and wrongs in the world. Echoing her rueful and ironic reflection “Yes, this is what the world needs: more of us” in the opening poem, she later imagines herself in the position of Jonah, reluctantly commissioned to bring bad news to Nineveh.

It may be remembered that Jonah runs away from his task; but Pollard sticks to hers. In another of her longer poems ‘The Pool of Tears’ she laments the way that much-needed sensitivity to suffering is blunted, even trivialised, by social media.

In ‘Parables’, Pollard returns powerfully and unsparingly to the plight of the lost and solitary

Besides being inescapably herself, this girl stands as a victim of societal failure – and perhaps of something more. In the second part of the poem there are references to the House of Praise and the Church of Bread which both seem indifferent to needs beyond themselves. Is this intended to imply either the failure or the futility of religion? Several other poems seem to skirt around the edges of this question and to reflect the theological meaning of the book’s title. The god [sic] who appears in ‘Leviathan’ seems strangely passive even though it may be possible to “sin against” him. In ‘Knowledge’ we meet the doubting disciple, Thomas, who has to “thrust fingers / in Jesus’ side” in order to be convinced of the fact of the resurrection; but the poem’s final lines “Blessed are those / who believe what they’re told” may be suggesting that religion is too often a matter of adopting ideas at second-hand. The questioning seems partly to be resolved in the poem ‘Emmanuel’ which also draws together the book’s two main themes. The poet is woken up by the mistaken thought that her child is awake. She finds

Incarnation is a book which, from the very first poem, can startle the reader with its vivid and muscular language and bold imagery. Pollard’s considerable craft is deployed over a wider range of themes than those already mentioned: she includes, for instance, a tribute to the Spanish Los Indignados anti-austerity movement, an unexpected message addressed to one of the moons of Jupiter and two quite fearsome takes on the Pinocchio story.  Buy the book and find out more for yourself!.