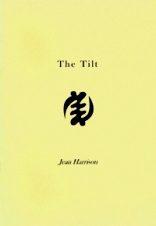 A tilt from commonplaces and stereotypes is what we perceive when reading Jean Harrison’s latest collection. But there is also a tilt away from the experience she had as a young teacher in Ghana when compared with her revisiting of the country thirty years later.

Harrison is a well published author: two collections with Cinnamon Press (Junction Road in 2009 and Terrain in 2012), and two novels (On a Wandering Planet in 2015 and The Fern Edge in 2017). Moreover, ‘Woman on the Moon’ was short-listed for the Forward Best Single Poem 2004. She is retired and lives in Settle, discovering the things she loves through writing and experimenting the texture of language.

The fifteen poems in The Tilt retrace her experience in Ghana where she worked as a schoolteacher in the 1960s. On the cover is pictured the Gye Nyame, an Adinkra symbol meaning ‘Trust in God’, or ‘Only God’; it seems to seal the poems in its double peaked shape – the left tip pointing down to earth, and the right one up to heaven. It signifies the concept of commitment in this world alongside faith in the Omnipotent, underlining the awareness that our efforts and struggles can be seen in a wider perspective but are also rooted in this world.

The Adinkra symbols celebrate the traditions and beliefs of Ghana (a name that means ‘Warrior King’), which was the first sub-Saharan country to gain independence from British rule in 1957. According to their customs, the symbols are printed, using wooden or metal stamps, on fabric (but can be found also on walls and pottery) in dark ink extracted from roots and bark of trees. Together with the Ashanti proverbs, quoted after the title of some of the poems, they mean to acknowledge the wisdom and ancient traditions of Ghanaian people.

As a young woman, Harrison campaigned for the independence of the colonies:

She is open to adventure and new perspectives, following the achievements of Kwame Nkrumah, the first Prime Minister and President of Ghana, which she reads about in The Manchester Guardian, while her mother prefers The Daily Telegraph.

It was her choice to challenge conventions; she left England and her comfortable familiar world to start her new life in Ghana. The school she went to work in, empty at first, is described with curiosity and openness marked by the space left between some of the words in the unpunctuated poem ‘One pair of sandals’:

These are attentive observations of the new place, which will soon become well known. Her employers find her a cook and a garden boy promptly, as she can afford it, and she needs to face some inevitable difficulties in the working environment as well.

Going back to Ghana after thirty years is a new challenge, another Tilt.

Even from above, she can see that things have changed and maybe not always for the better. Where once was the bush and the demure light of Tilley lamps, now there are houses, the sides of the streets are crowded with traders and the noise from bars is booming around.

The school looks the same but people have changed. Life is easier; luckily women don’t need to carry ‘firewood on their heads, / each bundle the size of a human body. Women don’t have to bend over to prepare traditional food: they have electric cookers, heavy saucepans and sets of knives to peel and chop fruit and vegetables. They may even have their own businesses.

The proverbs, which are quoted as epigraphs for some of the poems, sound wise, for instance:

They indicate the intent of the poems and define their borders in a conversation that I found touching at times but also intriguing. The idea that God cares for the ‘tailless animals’ (who cannot drive away the flies with their tail) indicates concern for people in need who trust in His help. Is the old fisherman a solitary crazy fellow or is he a deft net weaver? Is the silent water really deceiving or is it our attitude that makes it such? The fact that the moon eventually completes its cycle means you do not need to rush.

The marks of past slavery trade are revisited in an apparently innocent morning’s stroll, where the familiar landscape gives way to the darkness of the ‘airless hole’ for the women, the ‘hell for men’; and the iron rings are still on the walls. This is an atrocity that speaks for itself and cannot be commented upon further.

The final poem, ‘Senegal coucal’, states again Harrison’s fondness for the simple authentic Africa she experienced in her youth. Fascinated by the ‘glug, glug, glug’ call of the coucal (a bird from the cuckoo family), she describes herself as ‘cut off’ from the bustling life outside the hotel and reluctant to grasp the achievements of modern Africa. But still, the call reaches her and she cannot help being mesmerized by the life and sounds of Ghana.

Throughout this collection, Jean Harrison’s pithy, perceptive writing conveys a sharp point of view in precise descriptions and terse lines giving her own personal perspective of Africa.