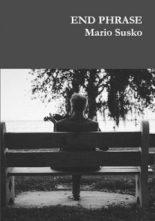 Mario Susko survived the war in Bosnia and now teaches at SUNY in New York. The poems in End Phrase were written in the period 2006 – 2017 and dwell on Susko’s role as witness but with the benefit of the distance of time. The poems are not a didactic response to the war but a record of being caught up in a time when horrors become commonplace, e.g. in ‘The Time of Crows’,

Initially the crows seem to be just a nuisance to be chased off – albeit shooting at them seems extreme when the noise of the gun will draw attention to the narrator who wishes to remain hidden. It’s only in the last stanza that the narrator reveals the crows were gathering around a human body like vultures circling around a predator’s kill. Ending the poem on a colon rather than a full-stop invites the reader to speculate on what happened next. The reader is spared the gory details but has been given quite enough information to figure them out. This is a less obvious but more powerful way of conveying the message.

Many of the poems explore the theme of survivors having to find coping strategies to deal with the memories that won’t leave. Not all of them are able to do so. In ‘The Violin Case’, a violinist, who survived earlier wars by playing for the enemy, throws his violin into a river and follows it into the water. It’s not clear how the instrument case ends up in the narrator’s possession,

Even amongst the horror, there are absurdities, as in ‘The Sniper and I’

These are poems of witness. Their power lies not in their messages but in the depth of observation and record. They grapple with how an ordinary man can describe the extraordinary events he did not voluntarily take part in and then share that description with someone who only read the headlines and didn’t appreciate the stories behind them. However, Mario Susko acknowledges that communication isn’t a salve, in ‘Things that are (and are not)’

Whilst the words of End Phrase will not heal the witness’s wounds, they enable understanding and give the reader an appreciation of what survival means. These poems are quietly vital and demonstrate compassion and dignity.

.
Emma Lee‘s most recent publication is Ghosts in the Desert (IDP, 2015) and she was co-editor for Over Land Over Sea: poems for those seeking refuge (Five Leaves, 2015) and Welcome to Leicester (Dahlia Publishing, 2016). She blogs at http://emmalee1.wordpress.com.