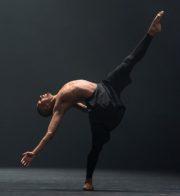 Wayne McGregor is the choreographer of the moment. Or, as it was put more accurately by the German-speaking critic who happened to sit next to me at the première on 4 October, it is well-known that McGregor “expresses the zeitgeist”. That this must be so is confirmed by the scale of the recognition he receives, as much from rapturous young audiences as from battle-hardened institutions.

McGregor is regarded as being the brainiest bloke on the block. His list of achievements, apart from his cornucopia of dance and theatre awards, include an Honorary Doctorate of Science from Plymouth University, an Honorary Doctorate of Letters from the University of Leeds, an Honorary Fellowship of the British Science Association, and a research fellowship in the Department of Experimental Psychology at the University of Cambridge. Aside from the scientists, it seems there is no great designer, artist or musician who doesn’t want to work with him. Over twenty years he has devised thirty works that have toured fifty countries and been performed at their most prestigious venues.

In explaining his naming of his latest work, McGregor reveals that he had his own genome sequenced during this summer and his thoughts about this event inspired Autobiography. There are 23 short dances comprising the whole, each designating one of the 23 pairs of chromosomes that contain the human genome.

According to a mysterious algorithm, each evening is different, with a changing selection of pieces performed in a changing order. (This creates havoc with the transitions of Lucy Carter’s lighting, Jlin’s music, and Ben Cullen Williams’ sets –  but let us not go there.)

With his dream team of phenomenal dancers, he makes his familiar abstract works that pulsate with quick, detailed configurations of the body, his trademark tics and jerks in a myriad of individual and group combinations. Although in Autobiography there is more measured pacing than we are used to seeing, his emphasis remains focussed on what bodies can do speedily, cramming into an instant as much change and variation as possible. There is the familiar motif of “display”: the expected spectacle, breath-taking physicality, beautiful flickering shapes surging across the stage with such rapidity that one barely has time to relish one before the next has taken its place.

Not for McGregor anything that is slowed to accommodate the shape of a narrative structure, nor that ebbs and flows in a measured accumulation and dissolution of time, nor that explores the arduous distances between aim, undertaking and attainment.  There is no exploration of feeling, of relationship, not a hint of an inner world.

It is a wonderful paradox that in his discussions about his work, McGregor cannot put strongly enough that he is overwhelmingly interested in exploring the possibilities of the body – yet there is no sign of sex. Characteristically his choreography is almost asexual, despite its physicality. Or perhaps because of it. Or perhaps because he excises emotion from his work. In the opening night’s selection, only one of the fragments in Autobiography comes close to expressing a smidgeon of sensuality. This anomaly is the moving fragment entitled “Lucent”, a duet for two men. Quite possibly the suggestion of a fine, tender intimacy arises from the effect brought to bear by the particular dancers rather than the choreography per se.

McGregor says that in general terms, an autobiography “doesn’t have to be nostalgic or commemorative. It doesn’t have to be about events, but can be about what one is currently reading or thinking about”. But there is nothing suggestive of words in this autobiography. The dance work he has created is an iteration of his interest in the physical articulation of parts of the body that have been stripped of language, that tell no tale. The work, for all its busy activity, embodies silence.