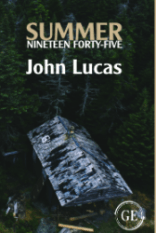 The narrator in John Lucas’s new novel Summer Nineteen Forty-Five is Peter Howard, a not-very-successful writer in the mid nineteen seventies, who is looking back on events which took place when he was eleven years old and living in an East Midlands village just after VE-Day. These events centre on the shocking and mysterious sudden deaths of two children in ways that could have been accidental and unconnected – and in the end are officially recorded as such – but which leave ample room in the local community for rumour, gossip and half-accusations. We see this troubled post-war summer mostly through young Peter’s eyes; but the older Peter is sometimes on hand to interpret remarks or actions that his eleven-year-old self would not have understood. It is only in the closing section of the book that the adult Peter comes to the foreground after a chance encounter has enabled him to augment his own memories with someone else’s observations and hence reach a (probable) solution to the thirty year old mystery.

Since it is told from the point of view of a child, the story is strongly event-driven and moves along quite rapidly. The younger Peter is observant enough, however, to note any mannerisms which might suggest someone is being devious. He also has admirable recall of his mother’s recipe for apple pie! And adult Peter’s hindsights allow the atmosphere of the nineteen-forties to be well captured: celebrations of peace are soon tempered by a sense that, on the rural home front at least, little is going to change in the short run. Rationing and austerity will remain; husbands and fathers absent in the forces will not be returning home very soon (and in some cases will not be coming back at all). This latter fact explains why most of the grown-up characters in the book are women. The mothers of all the children in the story are (for a variety of reasons and in some cases only temporarily) single mums. The only co-habiting married couple are Mr and Mrs Herbert who, childless themselves, have taken in a young evacuee, Lorna May. The few other adult male figures of any significance include the local policeman, a journalist and a German prisoner-of-war who has been set to work, unsupervised, on road mending (presumably such things did happen?).

Early in the story, Lorna May meets a mysterious death; her body is discovered in woodland some 48 hours after the Herberts first report her missing. Modern forensic examiners could, no doubt, have learned a great deal more from the corpse than was possible 1945; and all that can be said is that she seems to have broken her neck in jumping or falling from an old shed. In the absence of any evidence that anyone else was present when she died, a verdict of accidental death is recorded.

Things are just beginning to settle down after this tragedy when Lorna May’s real mother, Rachel, arrives in the village. Her understandable but overly-aggressive attempts to discover more about what happened to her daughter cause widespread distress as she looks for someone to blame. And indeed there are a number of people who might conceivably be held responsible: the Herberts are rumoured to have been deficient in their duties in loco parentis; and it turns out that there are others in the village who, by accident or design, might have played an active part in Lorna May’s death. Bad feeling is spreading through the community when another death occurs which seems to throw stronger suspicion on one particular person. But there is still no conclusive evidence; and the tragic events remain unexplained and unresolved for thirty odd years – until, that is, (no spoilers here) some new light is thrown on them in the closing chapters.

As already noted, the story unfolds at a brisk pace and maintains an engaging air of mystery. A few of the teasing and tantalising details seem however to remain as loose ends. For instance, I wondered (in vain as it turned out) if there would be any significance in the fact that Lorna’s mother, Rachel, makes a couple of mistakes with basic English clichés, saying on one occasion that “familiarity breeds content” and at another time mentioning “all the news that’s fit to report”. Furthermore, the young and glamorous war-widow Sally Parsons seems rather arbitrarily to fall in and out of friendship with Peter’s mother in a way that led me to assume (erroneously) that some secret issue between them was eventually going to be revealed. Such apparent red herrings may have arisen because eleven year old Peter is often excluded from significant grown-up conversations between his mother and other women. Therefore he has to rely on whatever his mother chooses to tell him the next day about discussions which took place in the front room (fuelled by a little alcohol) the night before. What he is told, however, does not always seem fully to account for the way that the adults behave towards one another when Peter next observes them. Sally in particular seems a strongly drawn character who doesn’t play as significant a role in the story as might be expected. Perhaps the reader is meant to infer more than I managed to do from the hints that are dropped?

I am glad to say that Lucas does not cheat and produce some last minute rabbit-from-a-hat piece of new tangible evidence about the deaths. The eventual unravelling of the mystery is largely done through interior monologues in which old facts are re-examined and fresh conjectures are made. All that Peter can do is recall what was (and wasn’t) said and done at the time and – with a little help from the fresh point of view of one other person – construct the most plausible scenario to account for Lorna May’s death. This “solution” finally offered seems to fit the facts and is one that Peter would not have been able to formulate for himself at the time.

Summer Nineteen Forty-Five certainly meets the prime requirement of any mystery story in being a genuine page-turner. It is pretty clear from the outset that a crime must have been committed (even though the 1945 police investigation does seems rather perfunctory) and the reader is led along briskly as various more-or-less-likely suspects are drawn across the path. Notwithstanding the one or two apparent lacunae mentioned above, the interactions between Peter and his best friend Ronnie are well realized and believable, as are the relationships between the principal women characters.

In closing, it seems fitting to comment on Lucas’s versatility as a writer. This latest novel – his third – is very different from its predecessor The Plotting which is a denser and more measured narrative and different again from such recent non-fiction works as The Awkward Squad about cricketing rebels. One can perhaps see a connection with some of the observations about post-war family life which appear in his memoir Next Year Will Be Better; but he has done well in using such observations to generate an authentic background atmosphere for telling a good and engaging story.