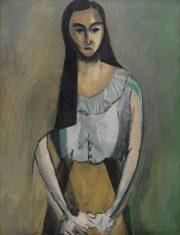 Matisse in the Studio,
Royal Academy of Arts, London (until November 12).

The Tate Modern’s record-breaking Matisse exhibitions are hard acts to follow, especially in the more domestic-scale galleries of the Royal Academy.

“Matisse in the Studio” does not deliver the sensational overdoses of colour and the full-on confrontation with genius of the Tate blockbusters, but there is a place for this more digestible insight into the transformative way Matisse saw based on examining his use of “objets d’art” as inspiration.

The angle has justification in the words of Matisse, who compared objects with actors.  “A good actor can have a part in ten different plays; an object can play a role in ten different pictures,” he said.  What interested him was the relationship, the sympathy, between different objects.

One of the first we encounter is an Andalusian glass vase.  It catches our eye for what presumably caught Matisse’s fecund imagination – an alluring wobbliness and the mystery of its colour.  It’s broadly speaking turquoise, but a turquoise defined by the material of which the vase is made and the light flowing through it.

Matisse’s response is Safrano Roses at the Window in which the colour of the vase is offset by delicate pink roses and mirrored by the sea while the white petals in another turquoise glass bowl echo the froth on the waves.  In turn, the roses blend with the row of seaside houses below and the whole has a vertiginous excitement as we perch on the window ledge that Mattise’s quirky perspective makes crash into the pink terrace below.

When he acquired the chair, Matisse said it was something for which he had longed for a year and it provides the inspiration for rapid-fire, fluid line drawings and ironic combinations, such as Venetian Chair with Fruit, which explore the personality of an object at once outlandish and wonderful.

For now, we’ve remained in Europe, but for Matisse the beauty of many of the objects his magpie instinct brought back to his studio was that they took him beyond Europe.  Like Picasso, he was drawn to African masks that represented an almost abstract representation of the human essence.

The link between the two giants of 20th-century art is underlined by Matisse’s paintings of his daughter Marguerite, one of which he gave to Picasso and which is displayed next to a Gabonese mask and another portrait: Marguerite with Black Velvet Ribbon.

The exhibition notes draw on the comparison with the impassive Gabonese mask, a link Picasso is also said to have made.  To the average visitor, the more obvious connection is the contrast between the painting of a youthful Marguerite with a thick black choker and pursed lips, maybe in primness, maybe in steely determination and a more mature, anxious-looking Marguerite with a narrow, chic, black velvet ribbon offset by a scarlet top.

It’s hard not to wonder what Marguerite would have thought of the comparison her father and his friend were making between her and a Gabonese mask.  The question takes us to what is unsettling about an exhibition that glosses over the reality that many of the objects that inspire are human: we have no issue with Matisse giving personality to objects, but we might be less at ease with the idea of peeling away the individuality from humans than a playful artistic genius for whom everything ultimately is subject-matter – including his own work.

Returning to the start of the exhibition, Lilacs, painted during World War I, depicts flowers dancing in light, while at the foot of the vase sits Small Crouching Nude with Arms, one of Matisse’s own sculptures.