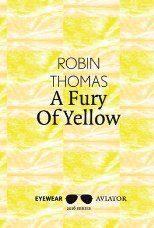 Graham Hardie takes particular note of the wide range of the poems in a debut pamphlet by Robin Thomas.

Robin Thomas’s A Fury of Yellow is a wide-ranging and enjoyable pamphlet. It features a variety of moods from light to dark; there are references to high culture, it includes the occasional family reminiscence and sometimes a prose poem. There is also a slightly sardonic wit about some of the pieces.

The first poem ‘Let’s Go!’ (a neatly constructed piece about a ride to Southend on a bike) impressed me initially with its alluring and imaginative image of “Dennis lorries staggering,/ past, black-wreathed in the sun.” It continues in a similarly arresting vein with “Tomorrow / you must turn your heart black / as sin, the Ace of Spades, as fresh cut coal.”

Also striking is “Right And Wrong” which centres on the grim overheard statement “Nurse, one of the twins / will not survive the night. Please separate them.” The implied moral dilemma is further highlighted and examined further in the lines:

and it finishes with the poet’s observation, “thank God for the nurse / who is right to be wrong.”

“The Grey Ghost and the New York Tugboat Strike” also illustrates Thomas’s concise and elliptic writing style with the tugboat being described as:

“Unopposed” deals with an army invasion which meets little or no resistance. It tersely reports “the tank engines clatter into life.” and “seated on the tanks, their legs dangling, are soldiers” and, eventually mentions “the clean up squads, taking what is moveable or edible.” This is a prose poem and is effective in painting its picture due to its well chosen language and the abruptness of its style which reinforces the brutality of the invasion.

“Expedition” is an entertaining poem which shows, I think, the poet’s use of sardonic wit. There is a quote attributed to Captain Scott at the beginning of the poem; but it turns out that he is not the main protagonist. Instead it is the poem narrator’s mother, as the opening line states: “Several times a day my mother / sets out for the South Pole:” The poem describes her climb up a mountain; and as she “reaches the summit with a great sigh / stares into the unfathomable dark.”

“Edward in the Garden” introduces a somewhat puzzling and surreal outlook, as Edward’s walk turns out to resemble an excursion into the sea with sharks that are “circling the apple tree.” These are “the hidden seducers” who are waiting for Edward, “the Satans sardonically circling.” Is this a metaphor for the serpent in the Garden of Eden? This is one of the poems I enjoyed most for its distinctive and imaginative description of the garden in the opening stanza: “The garden unfurls like a long sandy beach / and the waves are fondling, fondling, fondling.”

Other poems also demonstrate the poet’s obvious creative talent. “Excursion” includes a picturesque image: “The river is leaf-painted emerald.” “Bright Yarn” describes encounters with Great Aunt Edith who is “propped up knitting socks for me.” The meetings take place “where duty would take us weekly to sit / in her dim, tiny room piled up with the smell of sickness” – an atmospheric accumulation of authentically depressing elements.

“Christ Taking Leave Of His Mother” is another of my favourite poems. It is often poignant and engaging. It begins with “Grief in every face, every posture, every garment,” a line that perfectly sets the sombre scene. The grief is such that it is “dripping from trees, / suffusing her body, / collapsing her face, / softening her bones.” These are powerful and emotive images which make the grief extremely vivid. The poem ends:

– lines which I greatly admire for sheer impact and a state of awe expressed so simply and so acutely.

A Fury of Yellow is quite unusual in the sense that it fuses many elements into one short space: pathos; wit; dexterous use of simile and metaphor; a heightened imagination; an ability to make poetry from the commonplace. It offers fresh insight into the cycle of life and death, sometimes setting it in the context of the Christian tradition. One criticism might be that a few of the poems seem to me to be noticeably less accessible than the rest; but this is not to detract significantly from the overall accomplishment in this debut pamphlet by a talented poet.