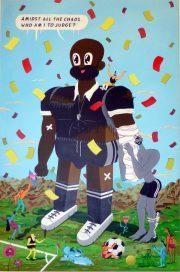 The Millennium Iconoclast Museum of Art (MIMA) in Molenbeek, an area of Brussels associated with breeding extremism, opened just after the 2016 terror attacks in the Belgian capital.

Housed in a former brewery next to a canal whose banks are lined with graffiti, MIMA takes its inspiration from Belgium’s tradition of graphic art, much of which is daubed on urban walls.

Art is Comic, billed as a light-hearted response to terror, is the latest exhibition to embrace rough, industrial brickwork as the perfect backdrop for popular artists with hundreds of thousands of followers and an outwardly casual attitude towards failing politics and social injustice.

As artists they are almost anonymous, hiding behind pseudonyms, and their works are more about location and the here and now than the timeless and enduring.

Straddling Europe from North to South, this exhibition brings together Joan Cornella from Spain and Jean Julien from France, HuskMitNavn from Denmark and from Belgium Brecht Evens, Brecht Vandenbroucke and the artistic duo Mon Colonel & Spit, who liken their art to the defiant scribbles found on school benches, in prison cells or on toilet doors.

For me, Brecht Vandenbroucke best fulfilled the exhibition’s brief to raise a smile and make grim reality more bearable.

His giant “foosball” player, towering above ranks of miniature men represents massive inequality in the game of life.

Vandenbroucke’s output also includes a cartoon of Sisyphus pushing his giant boulder up a hill labelled “My Choice” and a bubble caption on Edvard Munch’s The Scream “Where is Everybody?”  It’s caustic, unsubtle and moderately amusing.

Brecht Evens, stretching a point, is compared to Mozart on the grounds that he adds layers of complexity during the creative process.  His latest graphic novel the City of Belgium is a dystopian, exhilarating blur of taxi rides, intricate disco-dating scenes and sinister menace.

As we walk up wrought iron stairs, which for the traditionalist represent some of the gallery’s finest craftsmanship, to the top of the gallery, we enter the 21st-century daily realities as depicted by Joan Cornella, who apparently has 4.5 million Facebook followers, and Jean Julian who has 750,000 Instagram devotees.

I belong to neither fan club, but my attention was piqued by the spectacle of Joan Cornella’s grinning 21st-century man hanging by his neck from the gallery’s roof in the autumn sunshine, while Jean Julien’s metal people stare smiling or glum into their mirror reflections.

As a response to terrorism, it’s definitely wry and perhaps philosophical.