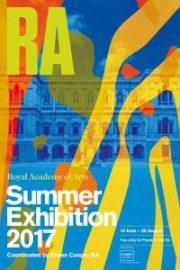 The Summer Exhibition at the Royal Academy, 2017, Burlington House, Piccadilly

A stock image of visitors to a private view of the Exhibition, 1965, shows ladies in hats, who wouldn’t have looked out of place a decade earlier, gathered around a conventional portrait of Her Majesty Queen Elizabeth II by Peter Greenham. This is not Swinging London.

Today, the Summer Exhibition is not regarded as much of an event and the arts press tends to treat it with condescension.  Maybe journalists have a residual image of ladies in hats when they review it, or are influenced by an air of fustiness and amateurishness which hangs over its reputation.

It’s seen as fusty because all the exhibits are selected and hung by the Royal Academicians, who are also allowed to submit six pieces; amateurish, because any member of the public is entitled to enter two works a year for the consideration of the selection panel.

This year a friend, who is training in the art of print-making, was kind enough to ask me to go along with her to the exhibition.  Although the prospect of viewing 1,200 works was daunting, we decided to jump in and see what we’d find.

On the whole, the curators have given the works the space they need and brought a coherent approach to displaying them in relation to each other, which provides the viewer with a largely satisfying experience.  Gallery I is the only room where so many smaller prints and paintings have been hung together they induce sensory overload.

Galleries IV and VIII were curated by Ann Christopher, whose selection of paintings, prints and sculpture in Gallery VIII produces some disturbing effects not normally associated the rather frothy image of the exhibition.  For example, Tim Shaw’s Defending Integrity from the Power that Be consists of two scarily life-like, but oversized cloth human figures with their feet planted on curved, metal blades, whose mouths have been stuffed with money and taped shut.

Ann Christopher’s sculpture, Silent Journey in Gallery IV left the most lasting impression of the exhibition.  The work is cast in bronze, covered in a green patina and shaped like an elongated, horizontal Zulu shield.  Its surface is lightly pitted and scored across the width, with a long, thin rod of shiny, twisted aluminium passing over it at an angle.  The final effect is one of great elegance and tranquility.

There are some immediately recognisable pieces, such as Tracy Emin’s neon sculpture, Never Again! and Michael Craig-Martin’s brightly coloured, untitled acrylic of a lap-top corner, which hang in the Wohl Central Gallery.

Another of Craig-Martin’s protégés, captures a spirit of summery joy in her gouaches All the Fairies, My Goblins, Bring me Her Heart and Sleeping Giant in Gallery III.

My enjoyment of the prints on display was enhanced by having a companion who is familiar with the artists who make them and the techniques they use.

She drew my attention to Hughie O’Donoghue’s Departure.  O’Donoghue, another graduate of Goldsmith’s College in the 1980’s, was born in Manchester but spent his child-hood holidays on the West Coast of Ireland, where he developed a life-long preoccupation with themes of history, identity and loss.

Departure is a mixed media work showing a huge, spectral boat coming towards the viewer on a breaking wave. The only human presence is a small face at the window at the side of the cabin. The work evokes a collective memory of the millions of Irish, who left the home country to free themselves from famine and poverty in search of a better life, but it also resonates clearly with the desperate flight of Africans and Syrians across the Mediterranean today.

When the Royal Academicians put on the first summer show in 1769, they declared an intention to show the work of all artists of merit to the public.  Much of the work on display in 2017 exhibition is of a high standard and seems continue in the tradition established by its originators.

Without forming part of the avant-garde, the exhibition still provides plenty to stimulate and even challenge the viewer, while the strong presence of the YBAs and their mentor Craig Martin is a good illustration of how yesterday’s sensationalists can become absorbed into the mainstream and eventually promoted to the top of the art establishment.