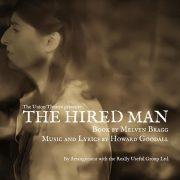 In a capitalist society, we’re nearly all hired hands, but the extent of the exploitation is more or less pernicious.

Melvyn Bragg’s gritty, Northern, sweeping tale ultimately finds the best option for the ordinary man is to accept a pittance to work above ground rather than to toil in a futile World War I trench or in a narrow coal seam beneath the sea.

Reaching that realisation is a journey and life’s journeys are the classic trajectory of musical theatre, although the blockbuster kind tends to favour the vastly simplified, feel-good route rather than the epic, bitter and realistic.

Once we’ve adapted to the awkwardness and lack of glamour, Brendan Matthew’s direction convinces us and moves us.

He draws on the core strengths of a cast mostly barely older than Bragg’s characters as they set out with their pride and their ideals intact and he makes them mature as the action unfolds.

Justin Williams’ spare, homely set and the intimacy of the studio space pull us in as Ifan Gwilym-Jones as John Tallentire, the hired man, and Rebecca Gilliland as his spirited wife Emily lead us from youthful energy and hope to betrayal, anger, grief,  passion, rejection and resignation.

It’s almost a musical in reverse, with Gilliland delivering her most heart-felt love song, not in the first bloom of romance, but after her infidelity and Gwilym-Jones’ raw outcry “What a Fool I’ve been”.

Amongst all the ordinariness, Luke Kelly as Jackson Pennington is supposedly the standout irresistible to women and dismissive of dull conformity, but Sam Peggs has more charisma as John’s irrepressible brother Isaac.

And in the end, it’s Gwilym-Jones’ John Tallentire who is the remarkable survivor.

Throughout it all Howard Goodall’s score marks out the rhythm, pain and momentary ecstasy of a life dominated by work and endurance.

As much as the leads, the star of the show is the ensemble, belting out with Northern intonation the harmonies and discord of a working community.