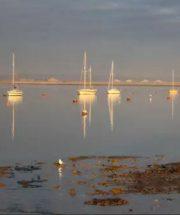 Londongrip’s readers are invited to take a cruise on the Thames Estuary on Sunday, 27th August.

Readers who live in London can take a boat trip on the Thames any time they choose and, no doubt, a number of them will have visited Southend and walked the mile out on the pier into its estuary.

The cruise offers an unusual opportunity to get a closer look at some of the Estuary’s less accessible attractions: the Red Sands Forts, built to protect London during the Second World War; the sunken cargo ship, SS Richard Montgomery and the Thames Sailing barges racing in their annual match.

Tickets for the cruise are being sold in order to fund the post production costs of Dorothy Leiper’s film The Living Thames.

The Living Thames is introduced by Sir David Attenborough and presented by environmentalist, Chris Baines.  It shows the work of the many people and organisations who ensure that the Thames continues to sustain all those who live, work and play by the river, through the careful management of its waters, beds and banksides.

The film reveals the diverse aquatic life which teems beneath the muddy-looking surface of the tidal Thames on its course from Teddington to the estuary, where it joins the North Sea.  The aim is to reconnect people with their capital’s river so that they can get to know it in the same way as earlier generations of Londoners, many of whom depended on it for their livelihood and transport through the city.

Passengers will board the 60 seater catamaran, Jacob Marley, at Southend Pier head at Noon and the cruise lasts three hours.  During the cruise they will get the chance to hear three Thames experts talk about the estuary’s ecology, marine life and history:

Amy Prior, Marine and Estuarine Scientist

To learn more and buy tickets, please follow the link:

Dorothy Leiper’s Living Thames will be premiered in autumn and then screened at film festivals and shown in community centres.  Free copies of the film will be distributed to London schools.