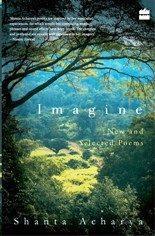 Sarah Lawson finds seriousness and humour, the personal and the fanciful in this recent and retrospective selection of Shanta Acharya’s poetry 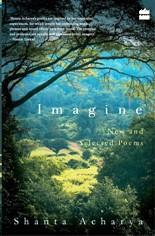 This new gathering of Shanta Acharya’s poems contains highlights from five earlier collections plus a generous group of new poems. As always in such surveys, it is interesting to see how the poet’s style and concerns have changed (or continued) over the years.

Acharya is in the nearly unique position of an Indian intellectual who is also at home in England, educated at both Oxford and Harvard, an authority on both Ralph Waldo Emerson and asset management. There is the inevitable homesickness for the sights and sounds of her native place, but also a Western sensibility and easy references to classical mythology and Christianity as well as Hinduism.

Some of the poems are responses to works of art, like the early “Belshazzar’s Feast” inspired by Rembrandt’s painting in the National Gallery. The poet is in several places at once: in the room looking at the picture and her own reflection, surrounded by other gallery-goers, aware of her own thirst, hunger, and fatigue; then considering the Biblical story of Belshazzar and the writing on the wall and reflecting on her own ‘bitter pills of my life in self-exile’. But finally feeling poised in the balance.

In the long “The Night of Shiva” we are in that Indian sensibility at home in Highgate. It is Shivaratri, the festival devoted to a night-long celebration of the Hindu god Shiva. In a moment the poet is back in her memory in Bhubaneswar visiting a temple with her family: the traditional parents, the less traditional brothers. They perform the traditional rituals, but for a moment she imagines the gods visiting London. ‘breakdancing round Trafalgar Square’ or calling her up on the phone.

‘Loose Talk’, from Acharya’s 1995 collection, Numbering Our Days’ Illusions, plays with free association and a punning exploration of ‘tongue’. Her mother’s tongue, her mother tongue, her literal tongue—finally polished pearls emerge, ‘coming full circle / to my grandmother’s home-truths– / balancing a world of words in my mouth’.

As personal as anything of Walt Whitman’s, ‘Names as Homes’ is addressed to Westerners who have no common ground with this Indian woman called Shanta Acharya, at the mention of whose name ‘faces suddenly go blank, / not the oriental sort that reveals nothing / but a Western impasse that conceals nothing.’ We who are implicated in that blankness learn a few basic things about the subcontinent, and Indian readers must chuckle in recognition of their own experiences.

Animal fables always seem playful and entertaining on one level, but the good ones also have a thought-provoking dimension. The moralistic convention is turned on its head in ‘The Fly and the Bee’, where these two insects compare their respective work habits. The fly boasts that it is equally at home on any surface, whether it is sacred or profane, ‘bearing the good with the evil, / hankering for neither.’ The bee, however, is more limited and laments that it ‘can only sit on blossoms / ready for pollination’.

Another witty poem, ‘Ichthys’, features an annoyed fish complaining about the symbolic use its kind is put to. ‘It was mainly the fault of that god-man who used us for his / miracles.’ Continues this spokesfish: ‘Why he could not settle for fruits or leaves is beyond us.’ It gets worse: wars are fought in their waters, there are oil slicks, and they are ‘a commodity subject to demand and supply’. The fish symbolism appears ‘without copyright on seals, rings, urns and tombstones’.

But the funniest, wittiest set of poems first appeared in Looking In, Looking Out (2005). They are “Dear Tech Support” and “Dear Customer”. The dilemma is stated in the first line: ‘Last year I upgraded Boyfriend 5 to Husband 1’ and there follows the chaos caused by the upgrade; among other things, Romance 9 has been uninstalled, and Cricket 6 and Football 8 have been automatically installed. It’s all a disaster. The speaker implores, ‘What help can you provide, dear Tech Support, in restoring / Husband to the default configuration of Boyfriend?’

Tech Support replies in ‘Dear Customer’ with timely advice and the reminder ‘that Boyfriend 5 was an entertainment package / but Husband 1 is an operating system’.

Back to the here and now, in ‘Silent Witness’ the poet observes a father and grown-up daughter in the London Underground; the daughter speaks sharply to the uncomplaining father. As the train goes through stations on the southbound Northern Line, ‘I want to tell her as we hurtle along / how time is short, not enough to squander / on pique…’.

From the same collection, Shringara (2006), comes the arresting poem ‘“Coconut Milk’, which begins in a deceptively ordinary way with buying coconut milk from Sainsbury’s, then turns into the cooking of an evening meal with a recipe you can practically follow (prawns, chopped onions, mushrooms, tomatoes), but then with ‘Moving to the rhythm of old Hindi film songs / you loved to hear, I savour your presence, father’ it turns into a poem about a daughter’s grief: ‘Sprinkling freshly chopped coriander leaves, / ground garlic and crushed chilli on the simmering curry, / my eyes are blinded with grief and a child’s fury’. The movement from the everyday but well observed to the intense emotion is beautifully done.

‘Black Swans,’ first published in Dreams That Spell the Light (2010), is in a contrasting philosophical vein. The past, the present, the path not taken: (‘You wander down lanes of lives never lived, / reconciling what might have been with reality’), the infinitude of possibilities, risk-taking. ‘We build theories like terracotta armies, / fallible guesses from fragmentary information, / success or failure being always retrospective.’ [p. 183]

But the new poems, what about the new poems? There are twenty-seven of these, and that section, ‘Imagine’, is introduced by epigraphs by Einstein, Blake, Thoreau, and the Mahabharata, so you know what to expect. Well, actually you don’t, but you get an idea of the scope of Acharya’s inspiration. The poems are generally responses to art and music; whether it’s Van Gogh or Benny Goodman, it provokes a reverie or a carefully crafted tangent. Among these springboards are pictures by Miró and Matisse and an exhibition at the British Museum of Mughal art. Another constant theme is the combination of more than one source in the same poem. ‘The Scream’ is a perfect example of that. A helpful note explains that in August 2012 she was reading about the origin of Munch’s ‘The Scream’ and at the same time reading Rilke’s poems from Duino, and then on Armistice Day in 2012 as she was admiring the sunset in Highgate she switched on the radio with all its bad news. ‘In a moment of epiphany, the history of suffering flashed in front of me. An inaudible cry escaped my lips.’ This note and the associated poem are a striking illustration of the way a poem can sometimes present itself to a poet: a combination of the present moment and recent preoccupations and interests. There can be a unique and barely conscious melding of ideas and impressions, moods and surroundings, and suddenly a poem takes shape and demands to be put into words.

Those strange riots in London in the summer of 2011 prompted an interesting train of thought, because Acharya was reading about Ashoka, a king in ancient India, and pondering the qualities of leadership, which seemed to be so absent in London that August. The long poem “Ashoka” ends this rich and satisfying volume. In ten sections of mostly unrhymed couplets Acharya recounts the life of this fierce warrior-king who feels remorse at the destruction caused by war and changes into an ideal ruler. He embraces Buddhism and makes the virtue of Dharma state policy: ‘he who acts / with greater good in mind accomplishes what is divine’.] It worked for a while, but the empire crumbled after Ashoka’s death. So high-minded altruism may not be the answer, either.

These poems cover twenty-plus years and show the development of Shanta Acharya’s concerns, inspirations, and poetic style. There is a good sampling of both her humour and her seriousness; of the very personal poems of displacement and loss and of the fanciful inventions; of Indian culture and life in London. There couldn’t be a better introduction to her work or a better summation for the confirmed fan.