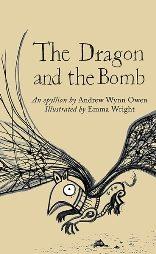 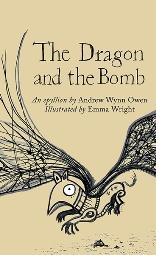 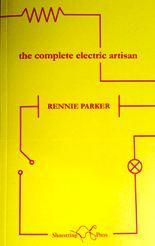 The Dragon and the Bomb
by Andrew Wynn Owen
illustrated by Emma Wright
Emma Press, £5

Andrew Wynn Owen is a very young poet who has won both the Newdigate and the Jon Stallworthy Memorial prizes (open only to students at Oxford University). One of these competition-winners, ‘Calm’, impressed me greatly; it shows a remarkable maturity and a gift for rhyming verse. Now he and the excellent Emma Press have produced a thirty-page pamphlet, a single poem in a style reminiscent of Byron.

The reader is likely to be drawn in by his humour and his skilful rhymes, but put off by the poem’s length, for most of us prefer poetry in short bursts; and the story isn’t especially interesting. It’s about an anchorite called Don Armando who is bored with life and seeks ‘adventure, of the dragon-slaying kind’. There is also an alchemist called Haplo who invents death-dealing machines. They find a dragon and they blow it up, but their actions have consequences:

Which brings back terrible memories of the Asian tsunami. When we reach the poem’s end we realise that it’s about politicians who roam the world looking for enemies and scientists who help them by manufacturing weapons of mass destruction:

He’s right, of course. The poem ends limply – “we should respect the dragon/And stop our stories short, before they start to drag on” – but still, I should be glad to hear more from this poet.

Rennie Parker is a nonconforming zany voice in an increasingly mad twenty-first century world. Her poetry (this is her fifth collection) is often set in a flat Fenland landscape where only the ‘humble mailbox’ is a splash of colour, waiting for someone to post a letter in the old-fashioned way. Elsewhere, ‘the slick laptops fly past’ and life gets ever more frantic– ‘we the undersigned would like to announce’.The first poem, ‘The Sleek Exhibitors’, is about “smooth administrators, briefcases crammed with important work”. The poet compares them to an army of ants. People are “glassy with febrile desire/to get on, get on, get on” (‘So when exactly are you moving on?’) Celebrities feature, too, in ‘My Tabloid Relationship Hell Scenario’, but why are we expected to care about their broken marriages?

From time to time we hear about interesting, unconventional people, like magicians who perform death-defying stunts or invent crazy machines. But more often it’s a con-man like ‘Mr Dissembler’, who sounds somewhat like Tony Blair:

‘The Difference when you are Single’ takes a wry look at those superwomen who think they can juggle high-powered jobs and families. “They stretch and strain and break themselves in half”, they can never fit in everything

We need more poets with this anarchic imagination.