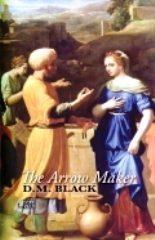 I have long admired D. M. Black’s poetry from a distance, by which I mean that I have only read individual poems and never, until now, grappled with a full Black collection. I regret waiting so long. From the outset The Arrow Maker leaves you in little doubt of the mastery of its author; the poems have a consistent quality which is perhaps peculiar considering that the whole collection can be seen as something of a treatise on doubt itself. I think it was Hugh MacDiarmid who said that shallow minds always seek consistency and I forget now who pointed out that it is a sign of high intelligence or intellect to ask questions and doubt most things with which we are presented. This doubt, or swithering, at first takes the form of a personal, creative vacillation – that things are perhaps better, stronger or resonate more with the human condition if they are not sealed into a hard interpretation. Take, for instance, the lot of the eponymous ‘Arrow-Maker’ who is good at what he does, acknowledges the necessity of his craft but also longs for something else:

The opening section of the collection is cluttered with poignant instances of human error, erring and uncertainty, from everyday scenarios such as in ‘For All They Knew’ where ‘It wasn’t clear what we’d all witnessed / but they meant to solve it’ to a shared moment of uncertainty between man and pigeon in ‘The Pigeon’ which crosses all boundaries. The speaker buries a dead pigeon he has found in his garden, only to notice another pigeon watching the interment:

There is no real personification of the pigeon here, more a mutual halfway meeting of species in the ineffable mysteries of life itself, creating a fleeting bond. One of the recurring notes struck by the collection is one of withering criticism of humankind for its despoliation of the world. Black deftly avoids making his poems sound preachy, however, as they come out of a scientific, factual awareness of what is happening to the earth. Black is no simple augur of doom, but a passionate observer of the threatened things of the planet:

In ‘The Moons of Jupiter’ Black imagines the far-sighted people who refused to look through Galileo’s telescope as being able to predict:

On occasions like this, Black’s style can be witty in a way that reminds the reader of Edwin Morgan’s learned playfulness; but intrinsically Black’s intention is deeply serious and often existential / philosophical. As the collection moves into later sections, the fear of absolutism and embracing of doubt moves into more spiritual and ideological realms. Black, in poems of great variety from free translations of Dante to ekphrastic poems, explores with some wariness the belief systems of various cultures that demand unquestioning devotion from their followers, such as in ‘The Buddha Amit?bha’. Here the Buddha speaks in rather worldly, municipal tones promising believers a ‘realm of joy’ but that they must ‘learn to wait / with infinite kindness’. Black’s suspicion of the absolute is also inherent in ‘Saint Augustine’s Eulogy for his Mother, Saint Monica’ where Augustine is left bereft by his mother’s death but believes that she, in her ‘freedom’ after death:

This higher, ideological doubt is also twinned with an acute eye for absurdity and pretence in human life. In ‘Quelques-uns des gens là-bas’ the speaker spots a ‘young spiritual healer’ who comes from a long line of healers and ‘I catch myself reading / Can I pull your / Tennants Pilsner’. Similarly in ‘C’est trop facile: Remembering Jacques Brel on the M6’ the speaker, listening to Brel on the radio, sees him suffering under all of his layers of stylised pretence – the gulf between a real life of ‘whisky and cinema’ and the world of sublime suffering cooked up by Brel in his songs. Yet even here, where the division between what is fake and real seems fairly clear cut, the speaker accepts that there are other sides to the story, such as the friend, who on hearing of Brel’s death, forces the speaker into going on a pub-crawl:

The key to the collection could be seen in the deceptively simple short poem ‘William Yeats’s Lament for Lady Augusta Gregory’ where Yeats, on Lady Gregory’s death, announces: ‘What shall I do for pretty girls / now my old bawd is dead?’ The phrasing sounds disparaging and listeners are apt to criticise the sentiment as disrespectful, yet they do not have access to the full story:

As such Black’s poetry shows us the plurality of meanings and readings from mundane to spiritual events and advises us to approach the absolute interpretation warily. In his free translation of Dante’s ‘Paradiso Canto IV’ the speaker learns that the intellect is nothing without access to truths that may lie well beyond its reach and that:

Black’s is also a challenging and illuminating poetry that does not speak down to the reader, but aims at all times to raise the bar and stimulate critical thinking or plant the seeds of a healthy doubt. As Carole Satyamurti has suggested, these poems give the impression of the poet writing to search for answers and that the composition of the poems themselves is a form of epistemic and existential quest, the answers not necessarily being the most important aspect of the journey.