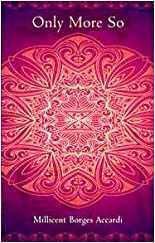 This is the fourth collection from a poet well known in the USA, particularly among Portuguese-American writers, but whose work is not widely known in the UK. Perhaps publication by Salmon Poetry, an Irish press with a strong reputation, will change this: the energy of her writing and her readiness to engage with other lives deserves a wider audience. It is these ‘other lives’ that challenge the reader; as a collection, Only More So raises difficult questions about how the reader locates the poet within the work. Accardi presents us with wide-ranging narratives, some in the third person, some first person – but the first person narratives are a range of different voices. In such a richly diverse collection I wonder, ultimately, how necessary it is to locate the autobiographical element.

Yet the opening poem, ’On a Theme by William Stafford’, places the poet herself firmly in the American poetic tradition; it is personal, a lyric celebrating the small pleasures of everyday living.

The unexpected break between ‘ice’ and ‘cream’ gives emphasis to the ‘cream’ element, a way of deepening the underlying physical pleasure and sensation, a stylistic feature that becomes more evident in later poems. Accardi brings senses and sensuality into her poems: ‘… a patted cake with a minute/ pot of yellow, whipped butter’ (‘In a Certain Village’), or the ‘… cardboard/ cups of salty, perfect, parsley-topped chicken broth.’ (‘Summer Vacations’). She reads the deeper emotions in physical gestures –

This increases the impact of her story-telling skill, her art of taking her reader to unexpected places, as in ‘The Well; for Jessica McClure’, in which Accardi takes us into the Texas well where in 1987 an eighteen-month girl was trapped for almost two days. In ‘Portrait of a Girl, 1942’ she gives voice to a photograph of Vendulka Vogelova, a few hours before her transportation to a concentration camp.

Ways for women to survive is a recurring theme. ‘Ciscenje Prostora (Ethnic Cleansing)’ is a woman’s story of rape during the Balkan conflict when ‘she thinks not of peace, but of surviving/ the winter, of outlasting the enemy, winning.’ She could be the same woman in the following poem, ’Only More So’, where ‘the flat-coated/ soldiers knocked at the door…’ Yet these are followed by a first-person memory of childhood, ‘Buying Sleep’ in which colloquial immediacy implies that this is autobiography: the near-gossipy aside ‘ –now mind you/ this is the brother I have/ hated all my life –‘ rings true in terms of sibling relationship. It’s a sudden switch that asks a lot of the reader; but perhaps the exercise of making choices is deliberate, a part of reading this collection to the full.

An energetic list poem ‘This is What People Do’ is an enjoyable romp through the variety of choices, large and small, people make in their lives –

It could be just an exercise but the relentless list, the piling-up of lives and habitual activities, has a strange way of reflecting back on the reader:

Perhaps it’s the unexpected line breaks with their effect of tipping the poem into the future – ‘Miles/ Davis’, for example, or ‘cellular/ phones’ in the previous quotation – that drive the poem onward. The distanced ‘people’ of the title cease being ‘they’ and slide closer to becoming something nearer ‘us’ – and aren’t we as strange to others as we are ‘normal’ to ourselves?

Accardi has a keen ear for what works well in lists, and how to bring in a more complex note. ‘The World in 2001’ seems, at first, to avoid its subject –

Again the unexpected line breaks – even more daring as a stanza break – driving the poem on. It’s confessional in tone, so why do I see this ‘me’ as a persona rather than autobiography? Perhaps it’s those line breaks, tipping the poem over, removing it from how in an ideal world we might like to see ourselves: kind, non-judgemental, nuanced. Yet there’s a measure of the unlikeable in all of us. That, though, is not the subject of the poem: that title can’t be avoided, and after five stanzas of other people it closes in, and comes home, and the certainties of belief dissolve –

In the context of 9/11 the poem has become local, narrowing down finally to just one person, Audrey, trying to fight cancer with all the means to hand. This is all we know of Audrey yet the way in which Accardi’s persona takes her for granted gives her a personal significance. The ‘Dad and me’ of the opening become more sympathetic as their world collapses; we watch their story unfolding, with no clue as to the coming end.

Accardi is drawn to this mixing of likeable and less likeable, in other poems, including ‘Under Different Conditions’. A quieter tone, less immediately dramatic than ‘The World in 2001’: is it this that suggests the poem has its roots in her own life? The conversational tone of the opening engages the reader –

That’s quite a list; some appeal, some are to be avoided. ‘They say …’ opens the subsequent three stanzas, the list snaking on, circling the subject until, four lines in from the end, Accardi echoes Elizabeth Bishop with ‘“Write it: you can say this.”’ , and names the ‘it’ that the poem has stalked so successfully: breast cancer. The poem does not tease – nor does it set out to do so; it is exploring, observing, nosing into its subject. It becomes the story of the truth: how the truth became.

Not every poem reaches this level of success but that would be too much to expect. Only More So is a dynamic and challenging collection, worth seeking out for the energy of its language and the variety in its story-telling.