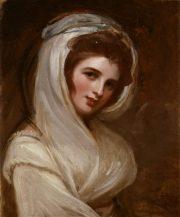 Emma Hamilton in Naples: Her Years of Glory. Jane McChrystal.

In her excellent review of the National Maritime Museum’s exhibition, Seduction and Celebrity , Barbara Lewis surveys the highs and lows of Emma Hamilton’s life: her rise through the demi-monde of London, artistic and political success in Naples, the relationship with Nelson and indigence and death in Calais.

It was the Kingdom of Naples that gave Emma the chance to transform herself into an artist, society lady and skilled operator at the court of Queen Maria Carolina, wife of King Ferdinand IV, its reigning monarch.

Her arrival in 1786 was most unpromising.  Emma was duped into going to stay with Sir William Hamilton, the British Consul at Naples, by her lover Charles Greville and gifted to him, rather like a beautiful new trinket.  Naturally, she was furious when she discovered the deceit, but within five years she was married to Hamilton and had a title, an amazing social breakthrough for a woman from her background.

How did she turn a potentially ruinous predicament into personal triumph?

Initially it must have taken an exceptional degree of pragmatism and self-assurance to get over the outrage of being fooled and rejected by Greville without losing her way.

Armed with looks, vivacity and intelligence she set out to get everything she could from a new environment rich in social, cultural and intellectual possibilities.

The first part of the process was an intensive education in the Italian and French languages, the arts and classical civilisation.   Tutors in French, dancing and singing were hired and she immersed herself in the study of Hamilton’s collections of Greek, Etruscan and Roman antiquities.  An hour a day was dedicated to reading Italian.

Now she was equipped to play hostess to the sophisticated, cosmopolitan guests who attended Hamilton’s daily dinners and musical soirees, which provided the setting for the famous Attitudes.

The Attitudes were a series of tableaux vivants based on poses depicted on ancient vases.  She performed them silently, dressed in a simple garment a la Grecque made of diaphanous material, revealing the contours of her body as she deployed shawls to bring to life women of antiquity, such as Niobe and Medea, for the delight of her eighteenth century audiences.

Great Britain’s campaign against Napoleon in Africa and Europe delivered Horatio Nelson into Emma’s life.  After his victory over the French at the Battle of the Nile in 1798 he sailed to Naples, where he was welcomed into the Hamiltons’ home to recover from his wounds.  Emma and Nelson soon began an affair with Hamilton’s complicity.

Emma had used her position in Naples to build a relationship with Queen Carolina Maria and became her confidante.  The Queen was the sister of Marie Antoinette and determined to avenge her death at the hands of France’s revolutionaries.  Nelson’s presence in Naples gave her the chance to use her relationship with Emma to this end.

In 1799, under the Queen’s influence, Emma encouraged Nelson to put down the Neapolitan revolutionaries who had allied themselves with advancing French forces in order to establish a republic.  Despite the British Admiralty’s serious doubts about the strategic importance of direct intervention in the fate of Naples, Nelson secured the surrender of the republicans and set about their utter defeat.  He executed their leader Admiral Caracciolo with 120 of his supporters and sent thousands more into exile or prison.

This was the highest point in Emma’s trajectory – from Blacksmith’s daughter to international power broker.  While this was an astonishing achievement, it requires some historical context.

In quelling the republicans Nelson exceeded his mission as a rear-admiral of the British Navy and gained a temporary reputation for barbaric behaviour in his home country.  He violated local mores by hanging Caracciolo rather than having him shot, the traditional form of execution for an individual of noble birth.  This act, together with the punishment he dealt to the other revolutionaries, ensured that he is regarded as a war-criminal in Naples to this day.

When we consider how Nelson’s dishonourable conduct towards his wife, Fanny, and the savage actions he prosecuted as a naval commander have been played down since his death at Trafalgar, it is difficult to understand the amount of bile that has been poured over Emma’s reputation down the years.

I fear the great English vice of snobbery is at the heart of this phenomenon.  Her unconventional relationships and lowly origins go some way to explaining the scorn she attracted, but what really seemed to exercise her contemporary critics was her vulgarity.

Vulgar – the word crops up again and again in their comments.  According to George Bernard Shaw:

Emma’s accent instantly exposed her roots to polite English society, and to make matters worse, she was effusive and unrestrained both in the content and manner of her speech and writing.  It must have been galling for upper class women, so tightly bound by custom and class, to watch her rise.  For, sadly, many of the disparaging judgements came from them.

In her life-time Naples freed Emma Hamilton to develop her talents and discard the shibboleths which would have blocked her social ascent in England.  I hope the Emma portrayed now in the Seduction and Celebrity exhibition represents a shift in the national perception of women and their social status.  In any case, it gives us a welcome reappraisal of a significant woman in England’s history who, for a time, extended her horizons far beyond anything most ordinary working class women of her time could ever have imagined for themselves.