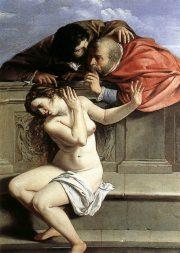 Overlooked for centuries, her paintings were often wrongly attributed to her father, Orazio Gentileschi.  In the same period her work sank to a level of obscurity equal to that one of her greatest influences, Caravaggio.  His reputation was restored in the 1920’s.  Artemisia Gentileschi had to wait a little longer.

Germaine Greer’s book on lost women artists The Obstacle Race, published in 1979, included this description of Gentileschi’s Susannah and the Elders, depicting a scene from the Book of Daniel, popular with contemporary artists:

Her body is not displayed in Susannah’s conventional posture of self-caressing, to excite the observer: she sits heavily, crumpled against the cruel stone of the coping, turning her face away from implication in the tangled drama of the two men conspiring to destroy her.  Her useless hands do not so much defend her, as draw her into ruinous complicity with her enemies …

Last year this painting was displayed in the National Gallery as part of the Beyond Caravaggio Exhibition.  The Palazzo Braschi in Rome is staging a major exhibition of her work until May 2017.  In the meantime books, essays, a novel, The Passion of Artemisia and a French film, Artemisia, have brought her to the attention of modern audiences.

Greer identified one revolutionary aspect of Gentileschi’s work: her ability to create a dynamic representation of a story, which involves viewers, rather than leaving them as passive spectators.  Other Baroque painters were experimenting with the same narrative technique in the early 17th Century, but women artists were still expected to stick with more static, traditional forms such as portraiture.

Her figures were full of emotion, shorn of idealisation and set within dramatically contrasting light and shadow which amplified their effect.  Her most famous painting, Judith and Holofernes, literally an Apocryphal story, shows Judith and her servant cutting off the head of the Assyrian general who has besieged their home town Bethulia: two strong women, with well-developed forearms hold down Holofernes with great force and hack off his head.  The blood flows freely.

Many interpret this painting as Gentileschi’s way of avenging herself on Agostino Tassi, the man who raped her when she was 19.

Tassi was brought to trial by Orazio Gentileschi in 1612.  Transcripts of Artmesia’s testimony still exist, where she told how Tassi raped her and she injured him with a knife in the struggle to defend her virtue.  The court tested her veracity by squeezing her fingers with an instrument of torture known as the sibille.  Tassi endured no such ordeal, but he was found guilty and ordered to go into exile from Rome.

The court which tried Tassi had no interest in bringing him to justice for Artemisia’s personal violation.  It functioned to prove that she fought for her virtue in order to establish his guilt.*

If Tassi had fulfilled the promise he made her father to marry Artemisia after the rape, Orazio would not have taken him to court.  He did so to restore honour to the family name.  In the end Tassi did not go into exile and Artemisia was married off to one of her father’s debtors, Pierantonio Stiattesi, and sent to Florence.  Everyone’s face was saved.

The way that Artemisia lived the rest of her life was remarkable.  Rape, trial and torture could have crushed her.  Instead she flourished and ended her days renowned throughout the courts of Italy, Spain and England.

Gentileschi was trained as a painter in her father’s studio with the aim of turning her into a useful assistant.  In the early days of her marriage she gave birth to four children while persisting with the development of her painting career.  The success of her efforts was marked by her admission to the Accademia di Arte del Disegno, a ground-breaking achievement never attained by a woman before.

There she met many of the most influential members of Florentine society including a powerful aristocrat, Francesco Maria di Niccolò Maringhi, who became her lover and life-long patron.  Although she grew up illiterate, the Accademia provided her with a thorough education in humanist literature and thought

Despite securing a number of lucrative commissions, she could never earn enough money.  This was partly because the most profitable work, such as painting altar screens for the Church, was still reserved for men, but she also had an insatiable need to live in the style of the wealthiest Signore of Florence in order to obliterate any trace of her earlier life and guard her reputation.  As a result, she fled to Rome in 1620 to free herself from debt.

Gentileschi was now supporting five children as well as her husband, Stiattesi, who was happy to be cuckolded provided he could enjoy the fruits of her artistic endeavours.  He remained a loyal supporter and promoter until the end of her life and enabled her to maintain the appearance of a respectable, married woman.

As her fame spread in the 1620’s and 1630’s commissions arrived from the Church in Naples and the royal court in Madrid.  She was invited to England in 1638 to help her father paint ceilings in the Queen’s House at Greenwich and attend the court of Charles I, who could never resist collecting the finest artistic talent from Europe.

She spent her latter years in Naples, where she was the first woman artist to set up a studio, employ assistants and produce the work which declared her genius to the world.  The life remains more inscrutable.

Her letters to Niccolo Maringhi portray a woman devoted to her art, a vital player in the intrigues of the upper echelons of Neapolitan society.  She was also prone to feuding and continued to live beyond her means.  With the complaisance of Stiattesi, she preserved her honour with the same determination and hypocrisy as those who could have destroyed it in her youth.

She cultivated and kept powerful patrons on her side right up to the end, an extraordinary achievement for a woman in Seventeenth Century Naples.  Many other women of her time had talent, social ambition and charisma without achieving her success.  Exactly how Gentileschi pulled off this feat is still something of a mystery.

*This might seem shocking to our modern sensibility, but we need to remember that it’s not so long since barristers in English courts tried routinely to prove that clients accused of rape were innocent, by demonstrating that their victims did not fight back physically during the attack.