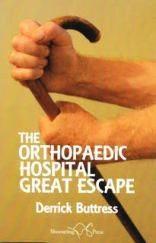 This is a handsome looking collection, and the title poem ‘The Orthopaedic Hospital Great Escape’, succeeds, in its metre, plot and surreal humour:

This opening immediately gives us a sense of place and of a voyage; the swing and rhythm of the lines contributing to the feeling of movement, as the escaping patients paddle furiously home for Christmas. ‘First Love: 1942’ is a nice conceit of a young boy falling for a Co-op bacon slicer – no, seriously – while the short poem ‘Writer’s Block’ is jolly in a self-deprecating way. ‘The Beer-off 1942’ gives a clear picture of a wartime grocery / off-licence; there are some effective descriptions with quasi-religious overtones to underline the preciousness of beer in wartime:

Several other of Buttress’ poems and short stories in this volume paint convincing scenes of that wartime and post-war era. Some go further back, even to 1578. Indeed there is much to entertain the reader – so why do I feel uncomfortable about his technique here and there? Does prose with line breaks make good poetry? Sometimes it does, and sometimes not. Buttress himself wryly remarks, in ‘A Short Prose Reader’:

Then we come to ‘A Sestina for Gregor Samsa’. In Kafka’s tale, Gregor was trapped in the senseless form of a gigantic insect – and I just have the feel-ing that Buttress has become trapped in the difficult form of the sestina. The poem is clever, but despite its bravura it somehow fails to attract.

There is daring elsewhere, in the 26 lines of ‘Abecedarium of Doubt’, ending as it does with:

– although to use Xmas as an X-word is frankly a cop-out (but almost any word beginning with ‘X’ might of necessity be a cop-out in this poem).

Don’t let these few strictures put you off, though; this is a stimulating collection. Towards the end we find the elegiac ‘Summer, 1914’; and in returning to ‘A Short Prose Reader’ who could resist the humour of

This collection is a real mix of poetic styles, but it makes for rewarding reading.