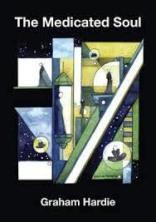 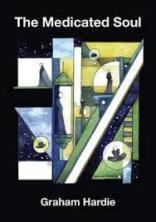 “The Medicated Soul” is a well produced book, and I want to like it, but the poetry is uneven – you might say it’s overmedicated.  There is much that is fun in these poems; they are rambunctious and some really do froth at the mouth.  Several of the shorter pieces are commendable: “peach” makes  a neat observation about the light and the dark sides of existence (but could have been even more concise)’; “Chicago” begins with a note / on the piano which turns out to be a goodbye; and “A message” shows off Hardie’s effective  use of repetition. All these, in their brevity, are able to convey a strong emotion and a firm image.  Repetition is well-used again in the appealing “the woman in the bookshop” … how you smiled when I said goodbye… and in the rather dark list-poem “cemetery”. “Three swans” is light and airy, but is quickly followed by “Oyster”, “A whisper”, and “The Virgin’s Birth” which – it has to be said – jostle each other for a Bad Sex award.  And some of the titles, for better or worse, just make you sit up and take notice as in “I sleep like a nun on crack”.

True love does get a look in: a word for the woman I love / a simple word, a word not spoken / by ordinary men … and yet in other poems Hardie tends overmuch to the clichéd metaphor – sometimes echoing (unintentionally?) pop songs of years gone by (To know you is to love you).  In “Love’s First Days”: The skies of ardour seek the oceans of love …  and most unfortunately the line after that is marred by two standout printing errors overlooked by the proofreader.

Other than love and sex, a recurrent trope is the Spanish gypsy.  Here Hardie does catch a convincing Lorca-esque note and some of the book’s best poems are in this category: “St Justine” tells of the death of an era of widows and dogs / of the velvet arms of a godless kingdom; and in “Seville” seagulls hawk at the soldiers / who lick the dust from their boots.  But the reader can often be bemused or overwhelmed by imagery.  From “Valencia”: …on the mountain / boat, without sailors or wind, / and where the sails are ripped / by angels carrying jars of gypsy / blood, offered to those lonely / and isolated and who feed on sex …   And Hardie’s enthusiasm for rhyme sometimes spills over into almost pastiche: in “Oana” we learn of the gypsy girl’s legs of desire and are then told that she raised her legs higher and higher.

Even with these reservations, however, there is a lot to like in these poems; they’re feisty and they’re daring. “Have you got what it takes?” is effectively a catalogue of famous poets that Hardie admires and sometimes tries bravely to emulate.  His attempts are not without success; but as a collection of real soul-searing poetry, though, I’m sorry to say The Medicated Soul lacks conviction, largely because of its unevenness. The author’s more ambitious flourishes do not always quite come off; and the book would probably have benefitted not only from closer proof-reading (as already mentioned) but also from stronger editing to weed out phrases that are clichéd or ‘go over the top’ and which undermine the genuinely strong poems on offer here.