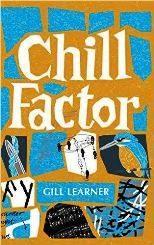 David Cooke examines Gill Learner’s new collection and finds a poet with a distinctive voice and many worthwhile things to say.

Gill Learner’s new collection, Chill Factor, is a worthy successor to her impressive debut, The Agister’s Experiment (Two Rivers Press 2010), and gives further evidence of her wide-ranging interests and sureness of touch. Her brief opening poem, ‘Flashpoint’, encapsulates many of her virtues and exemplifies the words from Rumi that she has chosen as an epigraph: ‘Raise your words, not your voice. / It is rain that grows flowers, not thunder.’ Inspired by events in Tahrir Square in 2010, ‘Flashpoint’ demonstrates her innate sense of form:

Within the space of a few lines we are propelled from a world of ‘pens’ and ‘tea-pots’ towards ‘smouldering cars’ and ‘shattered paving slabs’. The tone is understated but the details accumulate effectively. Nudged along by the short ‘e’ sound in ‘text’, ‘pens’, ‘heads’, the rhythm is quietly insistent. From here on, the tension mounts steadily, as ‘through gaps in niqabs / passions blaze’, until the poem is brought to its eloquent conclusion: ‘And history is made.’ If this is a ‘political’ poem, its strength lies in its journalistic focus and its lack of stridency.

Learner’s instinct for structure is shown not only in individual poems but in the overall shape of this well-paced collection. Her title poem follows on naturally from ‘Flashpoint’. A tour de force, it is again informed by conflict in the Islamic world, but this time it is seen through the eyes of a British soldier, as he tries to cope with the heat of Afghanistan and ‘dream cool’. Learner’s use of imagery is again exemplary, especially when, in the poem’s final lines, ‘keeping cool’ takes on a new meaning:

As is often the case in this collection, ‘Chill Factor’ is paired with another poem which reflects and refracts it. In ‘The Power of Ice’ the poet explores her own memories of ice and comes to the conclusion ‘that ice can conjure fire’, in what is presumably an intended nod towards Robert Frost. Elsewhere, too, Learner’s humanitarian concerns are much in evidence. There are some moving poems on the plight of refugees such as ‘It all repeats in dreams’, where refugees embark on a journey ‘like a jigsaw spilled from its box.’ In ‘The isle is full of noises’ the poet evokes the many strange sounds that the migrants will hear on their arrival in our ‘brave old world.’ This juxtaposition of two worlds, and the sense of ‘making strange’ that inevitably follows, is a technique used with particular success in ‘A Kind of Madness’, a poem about water, which ranges from floods in the UK and the poet’s own efforts to save water to her friend Nafiso’s amazement at Western plumbing, coming as she does from a world of water shortages and ‘fat generals.’

By way of contrast, other poems are set in less traumatic contexts, although frequently our justifiable aspiration towards the ‘good life’ is set against the backdrop of history or our own mortality. ‘What my daughter taught me’ and ‘Gifts’ are poignant poems informed by warmth and wisdom. While both poems are essentially lists and might, in less skilled hands smack of the workshop, the latter, in which Learner writes in memory of her parents, is particularly touching:

Here, like any true poet who has something to say, she does not shy away from unvarnished statements. Elsewhere, her family connections transport us to earlier wars. ‘Aunt Emily wanted to be a boy’ evokes a feisty aunt who volunteered as a nurse in WW1:

In ‘Playing the Game’ a woman is tuning in to a radio broadcast of Wilfred Owen’s poetry as she knits a cricket jumper for her son. Her thoughts then turn to other ‘mothers who had cast on yarn / against the Flanders cold wishing it were / chain mail.’ In ‘Coventry, 1940-1962’ she recalls the Luftwaffe’s bombing of the cathedral when ‘seven centuries / of prayer were blown to dust.’

Convincing, too, are those poems in which she explore the effects of ageing. ‘Somewhere else’ is a marvellous poem about coping with Alzheimers: ‘When you cry Why are you doing this to me? I know / I’ve lost you to an unmapped country past my reach.’ Less scary, perhaps, but just as good is ‘Retrieval’ in which the protagonist explores her own frequent memory lapses: ‘Five weeks back I lost the plant said to repel moles, / then the adjective for borders filled with flowers./ Herbacious returned that afternoon …’

Chill Factor is a rich and varied collection in which each poem (and there are fifty of them) has earned its place. It would seem that everything is grist to this poet’s mill: from ballroom dancing to soccer, from the dour streets of Dickensian London to the hush of a medieval scriptorium. She creates an aural tapestry evoking the life of John Keats and, in the four capacious stanzas of ‘Bookends’, manages to distil the entire history of the written word from ‘spiky runes’ to the digital age of Turing,

In recent years, with the proliferation of workshops and creative writing courses, it has become increasingly difficult to see the wood for the trees. However, there can be little doubt that Gill Learner is a poet of formidable gifts and that Chill Factor is a collection to be wholeheartedly recommended for its breadth of vision, its depth of feeling, and its unerring way with language.