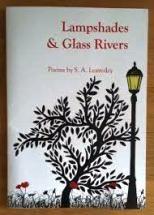 Emma Lee reviews a prize-winning pamphlet by S A Leavesley

This sequence of twenty short poems follows Ada’s love, marriage and attempts to start a family against the background of her grandmother’s fleeing from Poland. The poems focus on Ada’s internal state and journey. In VIII, Ada stays in a nameless hotel, country unknown,

There’s a focus on things hidden: the rooms behind closed doors that Ada has to imagine, each lightbulb hidden by a lampshade, the other guests, who might as well be ghosts, that Ada is aware of but doesn’t interact with. Yet Ada makes no attempt at discovery, she doesn’t explore the room but accepts it at face value. The reference to hypnosis and use of trembles when the glass beads of the lampshade react to guests’ comings and goings, suggests Ada is not in control of her fate and the hidden things may be guiding her. She reaches out to Babcia, her grandmother, whom she remembers knitting. In XI,

Sadly there is a miscarriage and Ada is left baby-less. Ada’s narrative doesn’t include her husband so readers don’t learn of his reaction but are left to speculate. She appears to have been left to deal with it alone although it’s not known whether her husband has chosen to be absent or if Ada has blocked him from her narrative. Ada struggles to find words to describe what she’s been though, in XVI

The subtle rhyme scheme shows how interlinked each element in the poem is, even though Ada feels her failure to communicate articulately with the hospital staff.

This pamphlet was the winner in the Overton Poetry Prize 2015 run by Loughborough University with proceeds from the competition funding a poet in residence at the university. It’s also a sparkling example of how pared-down language, carefully controlled rhythm and crafting combined with rich imagery can make poems dazzle.

Emma Lee‘s most recent collection is Ghosts in the Desert (Indigo Dreams, 2015). She was co-editor for Over Land Over Sea: poems for those seeking refuge (Five Leaves, 2015) and blogs at http://emmalee1.wordpress.com