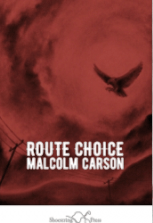 Malcolm Carson neatly catches our attention in the first poem of his new collection Route Choice. ‘Bookmark’ is based on the rather familiar device of memory triggered by a rediscovered photograph. From a book that has long been

I like the passing thought that a book might be bothered by being taken down from a shelf; but more disturbing is the subtle suggestion that it might be the sister herself – rather than merely her picture – who is destined subsequently to be lost. The poem sheds no further light on this and it makes an unsettling beginning to the collection.

Carson presents us with other effective ‘memory poems’ in the opening, untitled section of the book. One suspects that the memories are not all his own: ‘Wintering’, in which (to keep a child warm through an Antrim winter) They coated him in goose fat … stitched into brown paper must surely belong to a much earlier generation. ‘Mille Passus’, about a sadistic schoolmaster does seem to be a first-hand recollection however: His snooker cue lined up / my head again to correct misunderstanding. (Coincidentally, I have recently been reading a couple of other poetic memoirs about classroom experiences in the mid-twentieth century and now feel a mild form of ‘survivors guilt’ for having come relatively unscathed through the physical and emotional brutality that was so casually handed out in those days.)

There is a double level of memory operating in ‘The Known Soldier’ which recalls a First World War veteran who figured in Carson’s childhood:

But as to what memories informed that knowledge, Carson now remembers only that I was too in awe, or ignorance, to ask.

‘For Whom …’ plays with a piece of folk-history: in parts of rural France, apparently, church clocks strike twice – once to catch the farm workers attention and again so they can actually count the hour. (Coincidentally again, this had a little extra resonance for me becauseI had recently been reading The Noise of Time, a biographical novel by Julian Barnes about Shostakovich, which mentions the composer’s distress when two clocks in the same house are not synchronised and strike the hour one after the other. Such are the small details of context that can influence the impression that  poem makes upon us.)  Carson allows the labourers a moment of reflection –

– and then lets the poem undercut itself with the revelation that Jacques has got / an iPhone now, can’t hear / and couldn’t give a damn.

The poems I have mentioned are, for me, the best in the book’s opening section (which also includes some careful observations of horticulture and wild life). The short second section ‘Treatments’ is more focussed and is a response to being diagnosed with, and treated for, cancer. The sequence begins with waiting for the call I’d rather miss and goes on to make telling connections with the gardening poems in the previous section: ‘Blooms’ are mentioned in a context that excises all delight because these are not flowers but sinister images in a medical scan; and the passing of months of back-and-forth travel to out-patient treatments is marked by a botanical clock:

On one such journey the poet risks the cliché of remarking on his own face reflected in the window of another train; but by expressing the hope to see it veer / away on forgotten line that took it through the willow-herb, // the clinkered yard where only buffers wait he saves the day (at least as far as I am concerned – I have long had a fondness for the wistfulness of disused sidings.) ‘The Importance of Flirting’ deals with the significant matter of human relationships amid the technicalities of a course of therapy. (Hugo Williams has also touched on this in his excellent sequence ‘From the Dialysis Ward’ – see /https://londongrip.co.uk/2015/03/london-grip-poetry-review-williams/)  Carson hits an authentic note with

The book’s third section offers a pleasing selection from Carson’s previous chapbook Cleethorpes Comes to Paris which has already been reviewed on London Grip https://londongrip.co.uk/2014/05/london-grip-poetry-review-carson. This youthful travel memoir leads naturally enough into the poems of place which occupy the last twenty or so pages of the book. Many of these relate to the Isle of Skye and are enhanced with black and white illustrations by Stuart Quigley. One of the best of these is the bird of prey image which also features on the book’s cover (where it is not improved by an overall red wash effect). The accompanying poem ‘Ellishadder in Winter’ tells us

A more domestic animal encounter takes place in the Ellishadder Arts Café where the resident cat guides you from your car and where you will choose such fare as seems approved / by the wisdom implicit / in the cat’s gaze.

One more aspect of the book needs to be mentioned: the ‘Edgar’ poems which crop up throughout. Carson has used the voice of this character from King Lear in some of his previous books; but this may be Edgar’s most substantial appearance in any volume to date. There are six soliloquies on subjects as diverse as tending cacti, taking up sport and having a family. I’m afraid however that I have not yet entirely ‘got’ a consistent personality for Carson’s Edgar. Nevertheless, he does speak some effective lines: when visiting an abbey, for instance, he finds Tom’s devils are here yet I must resist, / turn from gargoyles’ mocking gawp. It is Edgar, too, who delivers the book’s tight and powerful closing poem ‘Edgar Regards his Attire’ in which The clothes I have / show stains of murderous events and, furthermore,