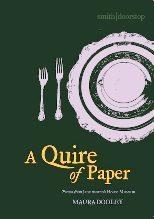 A Quire of Paper comprises poems written by Maura Dooley as part of her 2014 residency at Chawton, Jane Austen’s home in Hampshire. The house, now a museum, is where Jane did most of her writing.

I have often envied the poet-in-residence in a writer’s house who gets to sit in rooms where a poet or novelist once pondered the fit of a word, or screwed up pages in frustration, threw them in the fire. I can’t imagine Jane Austen in a temper, and, in the end, we can only piece together her life what might have happened, from the words of other people, as the brilliant ‘The Subjunctive Mood’ puts so incisively:

Dooley has mined various types of writing for her poems, such as the letters between Jane and her sister, Cassandra, one of which provides the pamphlet’s epigraph, Distribute the affectionate love of a heart / not so tired as the right hand belonging to it. The reader begins with the impression that Jane Austen and Maura Dooley are writers who continue to look out to the world and to others however driven they might be in the pursuit of their craft.

The opening poem, ‘The Visit,’ captures the inhabiting of poet’s house, and poet, in four fluid tercets,:

Just as the swallows / shred the air in quick bright strokes, the details in this pen-portrait of a cold spring are captured as vividly and seemingly effortlessly, the rhyming end words of each tercet providing ballast.

It is not easy to bring objects to life when they are listed in a poem. Too often they can remain as just that, a list, and fail to make the imaginative journey from the page. Dooley is skilled at concise evocations at levels of sight, sound and sense, and, importantly, of emotion. ‘Under the Eaves,’ an eleven line poem that looks as full as a sonnet, is both compact and expansive, ranging inside the house, and out into the countryside beyond:

In ‘Considering the Donkey Cart’ the cart, the horse and carriage of a modest household, provided a means of escape for the Austen sisters on muddy days, drab days, but, despite featuring in important moments of history (Ra chose you, Jesus chose you, Sancho chose you), the donkey (uncomfortable, unbiddable, mired happily, enduring / eschewing the tasty barley, chewing a thistle), in Dooley’s imaginings, cannot be easily coaxed from its deliberately sought privations. Is writing a donkey? Stubborn as hell but potential lifter of spirits. Maybe.

A writer-in-residence talks to the public, runs workshops. ‘Why Do We Come?’ suggests that the poet has asked the question of the visitors and has integrated some of their responses into the poem, Because we read her at school, at college, / in bed alone. The visitors’ book is likewise a rich source of found material, Her books have taught me to hope // Bellismo! (‘The Visitors’ Book’).

The title of the pamphlet, A Quire of Paper tastes delicious when spoken, so it is delightful to discover that it is the name of a layer of thin cream pancakes. Dooley provides the recipe and conjures the precise act of cooking in a poem of the same name, A froth heated just enough to settle and firm / or crisp lightly at the edges, / delicate, like the poem itself.

There are thirteen poems in this pamphlet. I was greedy for more but what is here is more substantial than some whole collections. It is tempting to quote poems in full but that would mean you wouldn’t buy it. It is elegantly produced, as are all Smith|Doorstop pamphlets: slightly larger than average with olive green cover and cream pages.

‘At the Grave of Cassandra and Mrs Austen’, the final poem, might have been sombre but is warm and uplifting, Though mother and daughter / I’d thought of them as babes-in-the-wood /tucked up, snug, beneath a quilt of moss. I hope the experience of reading these poems will be as uplifting for you as it was for me.