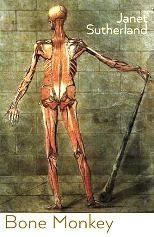 Emma Lee follows the poetic escapades of a trickster figure in a new collection by Janet Sutherland.

Bone Monkey is a malevolent trickster, an old god brought to life in human form and not necessarily a reliable narrator who is free to create his own myths, e.g. in ‘The Blacksmith made me’

This forged, fully-formed creature emerges into the world without a newborn’s innocence. When he his given a choice between two packets, one containing knives, cloth, paper and ink, and one containing immortal life, in ‘Red Hibiscus’ Bone Monkey chooses:

He is immortal and utterly dispassionate about death. He has a toddler-like uncomprehending of what it means and, later in ‘Fire fleet and candle-light’ likens it to sleep, curls in a foetal pose, pretends he’s dead. The closest he gets is snuffing out a candle. Bone Monkey gives love a go in the sequence ‘Bone Monkey in Love’ although it feels more like lust and ends when his lover becomes pregnant in the second part, ‘Chuman’

Bone Monkey shows curiosity in this thing that’s part-him but not-him, but loses interest and moves on. He’s never sure that the child’s his and his failure to bond with his child and accept fatherhood puts him firmly in denial. He’s an intriguing character, able to watch and observe without emotional engagement. Janet Sutherland’s writing is slick and focused, appropriately pared down and moves from observation to comedy to mischief and seriousness when required. She uses sonnets and ballads alongside free verse. Strangely Bone Monkey’s journey leaves him unchanged: he’s forever an outsider, playing with, but refusing to engage with life. It’s an entertaining journey, but Bone Monkey never reaches a destination. He remains in a child-like state, denying responsibility and maturity and reveling in his role as trickster. This leaves the collection without a story arc because Bone Monkey never deals with the consequences of his tricks. That said, it’s a worthwhile journey and Bone Monkey is worth meeting.

.
Emma Lee’s most recent collection is Ghosts in the Desert (Indigo Dreams, 2015). She was one of the editors for Over Land Over Sea: poems for those seeking refuge (Five Leaves, 2015) http://emmalee1.wordpress.com

How to Proceed All My Important Nothings