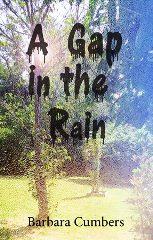 A first collection by Barbara Cumbers confounds the old idea of “two cultures” and shows a happy blending of scientific and poetic observation.

A poet assembling a collection has to decide on the placement of the poem which gives the book its title. There may often be a case for this poem coming later rather than sooner so that the collection’s poetic argument can build up to some point of particular significance. However the title phrase of Barbara Cumbers’s first collection A Gap in the Rain is waiting for us on the very first line of the very first poem ‘Wet Through’: I am a gap in the rain / which flows around me. This poem, made up of thoughts while walking through a downpour, is a very suitable opening to a book in which Cumbers is often observing and analysing her own progress through various environments and situations. As a scientist (a geologist) she is accustomed to looking below the surface of things; hence, even as rain flows round her outside she is also well aware that

Observation here is working at three levels: the chemical composition of the objects in the landscape; the strategic appraisal of (lack of) opportunity for shelter; and the poetic insight which spots a resemblance between rabbits’ ears and umbrellas.

In this collection, Cumbers seems more often than not to be walking in landscapes or working in a laboratory. ‘Field Notebook’ combines the two as the poet reflects at her desk on observations made on a previous occasion in open country. The seemingly casual mentions of ‘you’ who found the pink spider and were always there suddenly become more significant after the revelation that these are notebook entries made on the day you left. We can then understand the importance of the marks on sketch maps like kisses on letters.

The stoically rueful tone of ‘Field Notebook’ returns in various forms. Cumbers is honest about admitting that scientific work is not always exciting

Attempts to escape from routine do not always work. In a notebook stray phrases // nestle among columns of figures / and never become poems. And even the act of exploring spectacular landscapes can demand an effort of the will and a bit of self-motivation: Of course it was worth going on, of course it was – (‘Rainbow Bridge’). Sometimes however the habit of accurate observation and the poetic imagination combine very effectively, as in an old-fashioned hotel

Notwithstanding the skill evident in Cumbers’ perceptive, meditative (and sometimes slightly detached) accounts of urban and rural settings, it comes as a welcome change when she ventures into something more speculative. ‘A Vision of the City’, based on a remark by David Attenborough downgrading the importance of human beings in the natural world, imagines various London landmarks in a demonstration of the truth that ‘people could disappear tomorrow and life would just go on.’

(Pigeons seem to be the only creatures that would miss us!). More darkly imaginative is the poem ‘Lithium’ which expresses the effects of medication in terms of landscape. Once I would have worn a dress of daisies and danced … but … you didn’t know how close the clifftop was. Now however … the grass lies cropped short / all the way to the horizon. / I can see for miles – for flat and level miles. More striking still is ‘Thirst Fugue’ which is modelled on the form of Paul Celan’s ‘Todesfuge’ and speaks of the situation in the occupied territories of Palestine. It is difficult to convey the power of this poem in a short extract but here are some of its haunting repetitions

This fine poem occurs at about the mid-point of the book and is followed by some more fanciful pieces based on myth and fairy tale and then by vividly sympathetic observations of animals, birds and insects. A hedgehog is an old bootbrush of benevolence; wasps are black and yellow drunkards sizzling on their backs. We hear a stag beetle lecturing some his younger wet behind antennae fellows on the futility of flight. And a flock of lapwings flows / like iron filings near a moving magnet, /in and out of visibility /… until the field strength fades. Some of these poems suggest that Cumbers is not squeamish: she appears quite willing for both wasps and spiders to sit on her hand.

One of the later poems, ‘Puddle’, provides a pleasingly unifying link to the book’s opening one, set in a rainstorm. This psalm-like piece rejoices that God has blessed all puddles / and made us in his image; and it sits intriguingly alongside other poems which seem more sceptical about the role of a deity when it comes to human affairs (The man in the sky / put me in a lottery). In the enigmatic ‘Portrait of a Marriage’

This seems to be transposing the story of Noah into modern times – especially when we learn that the woman is teaching her children a strange religion / whose god is of desert and dryness. Such a return to the theme of rain would be characteristic of this quietly satisfying book in which each poem is subtly linked to its neighbours by a key word or image and the poems themselves are well-crafted and as carefully shaped as a scientist’s diagram.