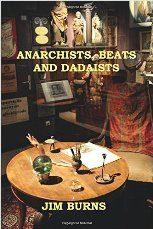 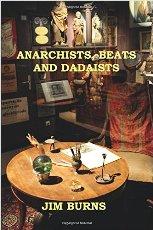 I’m quite proud of the fact that I once owned some copies of a literary journal Jim Burns had never heard of. It was called Glass, was co-edited by Madge Hales, a poet I rather admired, and at a guess ran for a few years in the late 1940s – early 1950s. I gave Jim the copies I had, although to my knowledge it has never featured as an item in Burnsopaedia, the seventh volume of which has just appeared. If there is anyone who knows more than Burns does about 20th century small presses, journals, now-forgotten writers, artists and jazz-musicians I have yet to meet them. I can’t be the only person for whom his collections of essays on the byways of modern literature etc form a vade mecum.

Nor can I be the only person who stares in sceptical incredulity at some of the names he mentions and with whose work he is on far more than nodding terms. Yes, we’ll all have heard of some of them, but who of us can hand on heart claim close knowledge of Alan Ansen and Bob Kaufman and Fielding Dawson and Joan Gilbert and …and.   But Burns knows. “Bryon Gysin died in Paris during the summer of 1986 .…Born in 1916, Gysin was educated in England and Canada …. In 1935 he exhibited with the Surrealist Group, but his drawings were removed from the exhibition on the orders of Andre Breton, and he was expelled from the movement.” Still, all was not lost. In 1957, we are told, Gysin worked with Burroughs, Ian Sommerville, Sinclair Beiles, Gregory Corso, etc. Then, should we wish to know more about Gysin and his world, Burns adds:  “ … The ‘history’[quotes are Burns’s] of this period can be followed in such publications as Minutes to Go (Two Cities Editions, 1960), The Exterminator (Auerhahn Press, 1960), Let the Mice In (Something Else press, 1973), Soft Need (Expanded Media Editions, 1977), and The Third Mind (John Calder, 1979). Soft need 9 (1976), and Harold Chapman’s The Beat Hotel (gris banal, 1984), also contain Gysin material of interest.”

I don’t quite know why “history is here protected by the quotation marks, unless it is to suggest that caution needs to be exercised when consulting books – are they? – whose reliability can’t be taken on trust. But how on earth can we know? The passage I have quoted gives something of the flavour of Burns’s scrupulous regard for reporting the details of what for most people is invisible to the naked eye. The literary historian, Adam Rounce, author of Literature and Failure 1720 – 1800, a fascinating study of literary failure in the 18th century, would, I imagine, find himself in sympathy with much that Burns has to say about the world of which he is the kind of naturalist who, Swift tells us, “observes a flea/hath smaller fleas that on it prey;/And these have smaller fleas to bite ’em,/And so proceed, ad infinitum.”

But while Burns is scrupulous in his methods, this doesn’t make him merely an observer. The ant may be a centaur in his dragon world, but centaurs aren’t all the same. Some centaurs are hairier than others. Though Burns writes warmly about the British tenor-saxophonist, Tubby Hayes, he doesn’t give him free entry to Parnassus. Hayes, he shrewdly notes, often played too much, too fast. “I listened in vain for the pauses and silences that can add tension to a performance …. Hayes’s boisterous personality seemed to incline him towards filling in every gap, rather like someone who wants to dominate a conversation.” Spot on.

Inevitably, there are moments when I want to disagree with Burns. I don’t accept his own acceptance of Kenneth Rexroth’s explanation for the loss of contact between the British and American (West-coast) avant garde in the later 1950s, which Rexroth puts down to the fact, as he sees it, that “a kind of hopeless inertia – atomphobia –  has settled upon the British avant-garde.” As far as I can judge, in the USA fears of the atom bomb were largely muffled or even laughed off. (Remember Atomic Café? Just duck under the desk, kiddies, until it all blows over – literally.) “Inertia” hardly does justice to the Aldermaston marches, which started life in 1957, nor to much that was being written and spoken at the time. The response among UK jazz aficionados to the great LP The Atomic Mr Basie was, I seem to recall, one of appalled incredulity. The music itself was wonderful – the apotheosis of big band swing; the sleeve-cover image, of an atomic explosion, suggested less apotheosis than apocalypse.

Besides, whatever you think of the merits of Adrian Mitchell, Christopher Logue etc., they certainly couldn’t be accused of inertia. Moreover, Gael Turnbull’s Migrant Press was alerting some of us in the UK to what was happening on the American West Coast. I was an undergraduate at Reading University from 1956-1959 and can remember that one of my tutors, the great eccentric, poet and man-of-letters, Ian Fletcher (who had been in Cairo during the war, and who was friendly with a gallimaufry of poets and writers from that raffish world) regularly received the scruffy roneoed sheets which Gael sent over from California and in which I came across poems by Ginsberg, Ferlinghetti and others. Ian was in touch with Thomas Parkinson, a Californian Professor who brought over to England Ginsberg and Corso, both of whom I heard read in London in the autumn of 1958. (Anyone wanting to know more about what was a pretty mad evening can find a brief account of it in my Next Year Will be Better: A Memoir of England in the 1950s.) And for what it’s worth, I should mention that I heard Rexroth read in London a year later and, though I don’t remember much of his poetry, I do remember that he  accused us, the English, of having killed “the little songbird” Dylan Thomas. We apparently undervalued Thomas’s poetry and encouraged his drinking habits. Rexroth suggested that Thomas had drunk himself to death as an act of despair. As Ian said, Rexroth’s claim was a bit rich, given that at the time of his death Thomas was adulated this side of the Atlantic, while an excess of American whisky accidentally did for him while he was on a lucrative reading tour in the States.

It should also be said that in claiming that Horizon, Poetry Quarterly and Poetry Folios were the first UK journals to publish the new American poetry, Rexroth forgets or, more likely, is unaware of issue 4 of the wartime Transformation, where you can find an article by Hugo Manning on Kenneth Patchen, a piece by Patchen himself, and poems by, among others, Marianne Moore, Wallace Stevens, Allen Tate, and Randall Jarrell, although, as the selection of American poets was compiled by Oscar Williams, it inevitably contained some of his own inspissated work — of which, as Jarrell memorably said, “it looked as if it had been written on a typewriter by a typewriter.”

My gripe against Rexroth isn’t really extended to Burns, though his endorsement of Rexroth’s words illustrates how difficult it is to get recent history right. This is partly because we all come at it from different experiences, different angles, with different likes and dislikes. Burns’s keenest enthusiasms, as the titles of his seven – and counting? – collections of essays and articles make plain, are for American West-Coast modernism, in art, music, poetry and prose, and for European movements such as Dada and Surrealism. You wouldn’t go to Burns for an informed opinion on Philip Larkin or, say, Camus. But you’d be a damned fool if you didn’t want to consult what he has to say on Kerouac or Tristan Tzara, to pluck two names more or less at random from the alphabet soup of writers, artists, and musicians who fill the pages of Anarchists, Beats and Dadaists.

Burns, a man of generous instinct as well as intense sympathies, also puts in a good word for other critics and commentators. There is a warm appreciation of a collection of essays by the poet and critic, Tony Roberts, The Taste In My Mind, on modern British and American poets,  for which, as it was published by Shoestring Press, I feel grateful, though I am even more grateful for Burns’ essay on “Janet Richards and her Common Soldiers.” Common Soldiers is the title of a book which Burns tells us Ferlinghetti calls “an undiscovered classic,” and which is about Richards’ immersion in the West Coast literary and music scene. If Burns’ quotations from Richards are anything to go by, the book is indeed essential reading. Of Weldon Kees, for example, Richards (1915-1985) remarks that “he had the peculiarity, and it was also his greatest gift as a poet, of having become the intellectual intimate of hopelessness before he was an adolescent. Even before he had been in love he had learned to mourn.” No wonder she recognised early on the quality of  Lester Young’s innovative genius. (For anyone interested, and we probably all should be, Common Soldiers was published by The Archer Press, San Francisco, 1979.)

Some of the most interesting essays in Anarchists etc are autobiographical. Burns begins one, “An Unholy Row,” with the following words. “In 1950 I was fourteen and I heard a Dizzy Gillespie record that changed my life. Well, perhaps it didn’t actually do that because I still had to go out in the morning on my paper round and then dash off to school. But it certainly opened up a whole new world for me, one which revolved round the weekly Melody Maker and the occasional jazz record …”  I’d love to know what the record was, and where Burns heard it, if only because a very little later, when I was fourteen, I sat in a bare-bulb classroom of my school’s “Rhythm Club” (“jazz” was a proscribed word) and heard a Dizzy Gillespie record, “Cognac Blues” that, if it didn’t change my life, certainly began such a change. I’d like to imagine that this change was happening all over England, though I don’t suppose it was any one musician or style of music that brought it about or was the trigger mechanism for new energies which emerged at the time, even if they’ve been ignored or minimised by those who have a vested interest in claiming that change – real change – was a phenomenon of the 1960s.

I am writing these words having just seen a wondrous exhibition of the visual work of David Jones at Pallant House, Chichester. When I left the exhibition I had to walk through a room housing work by the Pop artists of the 1960s: vacuous, trivial, superficial, “knowing” – and knowing, of course that making art like this is the way to coin it. This is the true decadence. It’s good to be reminded of a time when artists, musicians, writers, had more important things than money or the desire for popularity on their minds, when being an artist meant the opposite of being a “celebrity.” Anarchists, Beats and Dadaists pays tribute to all those for whom art was not made tongue-tied by authority, who never made a poorer verse (or work of art or piece of music) that they might have a heavier purse. For this, much thanks.