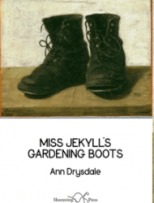 This is a collection that celebrates life and more specifically life in old age. The eponymous Miss Jekyll’s ‘boots’ become a metaphor for ageing. They are celebrated as the possessions of a now dead woman whose work and reputation lives on. This is not the reverence of a teenager for a saccharine pop star but respect for a woman who even into old age undertook splendid work. Here at the end of the poem is the first reference to death not in crude terms but rather in Tennyson inference:

Indeed death in all its guises recurs as a natural process in the collection. Thus it is sometimes linked to the turning of the seasons in nature, very often in the garden. The word ‘turn’ itself is frequently used to denote this shift. This gentle inference is again echoed in the poem NERINE BOWDENII, where a friend gifts a plant which is initially not quite to the narrator’s taste it being rather frilly yet in retrospect it is seen that the plant will late flower in autumn hoisting ribboned lances so as to shake them in the face of winter. For the narrator this audacious last stand against the year’s death becomes a wry suggestion of her own predicament perhaps that’s what you thought of when you bought them. Again this is a splendidly positive image of old age echoing, but opposite to, Eliot’s old men with dead geraniums; here colour and frivolity will antagonise death much as the narrator intends to do in real life.

The poem SLUTFEST! certainly shakes up the collection. It is a celebration of we sluts and hussies who live counter to social expectations both in sexual and artistic terms and argues for a life well lived at any age . Sex is again included irreverently in the poem FROM CATTULLUS TO FABULLUS where the poet’s wit combines with her classical knowledge to create an outrageous dialogue in which all kind of sexual mores are offered a guest from a knowing host who has clearly sampled most of the fare – I’ve pricked her thicket and it’s not at all bad. In a sense this linking of sex with death in is tune with much of literature and reinforces the idea that the two are psychologically bound.

The collection is inhabited by a cast of characters, the majority of whom are mature. (It is interesting that all the titles are set in capitals which suggests a shouting need to celebrate and draw attention to the past, and the elderly who are often over looked in society today.) This is not to say that the poems are maudlin – far from it – since Drysdale is extremely witty. In some of the poems the lives of well- known writers are explored. Thus we have FROM LARKIN’S NOTEBOOK NUMBER THREE, where a researcher poring over Larkin’s work senses the relationship between Harry Chambers and the poet. Indeed the collection has a literary slant, often writing about writing; but its skill lies in being inclusive of the non-literary reader. Writing is but another skill that wanes with old age and writers are human and age like the rest of us. Hence, in ROBERT FROST TACKLES THE BLOCKAGE, the persona is, to all intents and purposes, unblocking a septic tank and the language reflects this: I have become one acquainted with the shite; to face the faeces with only hope. On one level the character is undertaking this grim job while on another level the poem refers darkly to an understanding of the baser aspects of human nature which may loom larger in old age.

Indeed it is Drysdale’s poems about everyday eccentrics I particularly enjoyed. So we have the gentleman in FOOTNOTES whose warnings Bad For You are found left on footpaths , at the gates, hung on the wire in bits of plastic bags. Over time a bond is created between the persona and the gentleman until the notes cease suddenly, leaving the narrator bereft :

Perhaps the most touching of these poems is LAMENT FOR LOST CAULIFLOWERS, where a hairdresser bemoans the passing of a generation of women who came for quarterly permanents and weekly shampoo/sets. Part of the poem’s skill is the precise and evocative description of the hairdresser’s tonsorial skill with the ladies’ white fuzz hair. This procedure is something most readers will be familiar with and the image of the perfect cauliflowers will chime with those of us who recall mothers and grandmothers with similar hairstyles. Yet they are a dying breed; the older ladies now demand soft colours and manageable cuts and this suggests a new generation of woman with busy lives who consider themselves mature rather than elderly. Yet the poem ends with the wry lines delivered by the mother’s face looking back at the narrator in the mirror. Beware! The beast that bites the heads of the Cauliflowers will not refuse a Manageable Cut.

The collection showcases Drysdale’s accomplishment not only in rhyme and form but also in her ability to pastiche older poems. This becomes something of an in-joke but is not exclusive. It is however another instance of her wit. Thus we have the poem THOUGHTS IN WARM WINTER that begins with a nod to Auden About sex they were never wrong, the Olympians and continues as a wry contrast with classical sex and how it falls short in real life, especially where elderly gods seem to still be capable of ravishing young women, whilst in reality sex in old age can fall rather short of this. In UPON FIRST LOOKING INTO KOWALSKI’S MARKET the opening lines are Oft have I trundled through the sullen aisles. Again, as with the previous poem, the reference seems to open up a gap between literary ideals and reality, suggesting a paucity in modern life that must be dealt with. Perhaps the most telling contrast comes in IF I SHOULD DIE; its first line I shall try not to die sets the tone. The poem moves as far away from Brooke’s idea of the heroic death as possible. The tone of the piece is matter-of-fact to avoid the sentiment of the Brooke’s piece. It looks in the face of the facts –which include the certainty that the narrator will die – and speculates on what the end will be before examining the character’s agnosticism. But it is the end of the poem that is so arresting. The persona, who lives alone as many of us do in older age, speculates that If I am taken unexpectedly, her companion a small dog, will not be able to use the phone and thus, as time passes. he will, she anticipates decide I have at last provided /and partake. The black humorous use of at last lifts the tone but the poet is keen to make the reader understand the full extent of our link to nature and thus she takes death to its fullest conclusion:

Again the situation is not the tabloid horror scene of an old lady eaten by her cats but an explanation that bodily decay is a natural process and it is her sympathetic choice of language to describe maggots as smaller and needy, who have a job to do that saves this poem from being gothic and makes us understand that we are all part of a natural process.

To counterbalance these home-truths there are a number of poems that take everyday events often instigated by the natural world and reveal how such occurrences can transport the narrator into a philosophical musing. Often birds are the agents of such events. In AFTER ALCUIN and POST HOC ATQUE PROPTER classical references blend with actual birdsong to inspire an almost religious reverie.

Two poems are vivid in their celebration of nature at its most beautiful. DIGITALIS is a gloriously detailed evocation of fox gloves in spring described with such vibrant language as:

Similarly KINGFISHER skilfully presents a bird who chooses plumage from a secret drawer as if she where a fabulous film star. Such anthropomorphism helps to create a contrast between the bird’s beauty and the fact that

The conceit here is that on one level the kingfisher, like a star, is coy about her privacy but on another level she harbours the shameful secret of a slatternly home where there are scattered bones that stink of fish.

One poem, HOW SAD BEGAN, particularly chimed with me. It examines the onset of that emotion in the character’s life. Whether depression or sadness born of a specific event, the effect is the same, a gradual invading of all aspects of life. I have never read a piece examining this phenomenon so powerfully. Here it is done so in detail. Sad is personified as an enemy who takes over the She of the poem’s existence and being. Each stanza charts the gradual invasion. As in fairy tales he is the agent of frost that freezes every aspect of life until all people and places for the narrator become ugly. What also strikes the reader is the truth that sadness does not visit once but becomes the dreaded old enemy who laughingly taunts Ha -Ha Got you again!

This is a very fine collection that is both touching and witty. It handles old age honestly but is in no sense negative. The technical skill displayed is enviable and the language fresh. It certainly chimed with this woman of a certain age offering as it does, a reassurance that we are all part of a natural cycle.