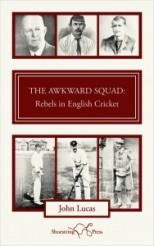 Only a few weeks have passed since the English cricket team beat the Australians so overwhelmingly and unexpectedly that questions were asked not merely about the ability but also about the character of the defeated team. Oddly enough, in the preceding months, a string of poor performances by the England players had caused their resolve and resilience to come under severe scrutiny*. Stubbornness and independence are the character traits dealt with in The Awkward Squad, as John Lucas considers players who have defied the autocratic (and often aristocratic) English cricketing establishment. He gives especial credit to those who have done so in pursuit of honourable objectives.

Lucas begins his story in the 18th century when cricket matches were often arranged by members of the nobility and substantial wagers were placed on the outcome. The players were professionals, mostly employed on what we might call short-term (or even zero-hour) contracts within the same sort of feudal system as agricultural labourers. By the late 19th century the game had developed a county championship structure we would recognize today; but the wages and status of the professional cricketer had not improved significantly. Cricket was still run by committees of Gentlemen – some of whom were able to command a place in the county First XI that was not merited by their batting or bowling abilities – and it was expected that the professional players would be as subservient and hard-working as any other hired labourer.

An early example of awkwardness occurred in 1884 when Arthur Shrewsbury, a noted Nottinghamshire batsman, refused to play in a representative match against an Australian touring team because the fee of £10 was too low. He persuaded two colleagues to join him in this protest and thus became one of the first players to take some sort of organised action to seek improvements in pay and conditions. A couple of years previously, Shrewsbury had used withdrawal of labour with some success in getting better personal terms from his county side; but it took almost a hundred years for this sort of action to bring about any widespread transformation in conditions of cricketers’ employment. It was the defection in 1977 of many prominent players to take part in World Series cricket matches (organised by Australian media tycoon Kerry Packer) that put an end to (most) high-handed behaviour of cricketing authorities towards those who actually got their living from playing the game.

It might be expected that members of an awkward squad would always come from the ‘working-class’ ranks of professional cricketers. But Lucas identifies some from cricket’s upper echelons who stood out against the majority of their establishment colleagues to support players whom they felt had been harshly treated. A W Carr and D R Jardine for instance (respectively County and Country team captains) remained loyal to the Nottinghamshire bowlers Harold Larwood and Bill Voce when they came under fire for supposedly ‘unsporting’ tactics in the so-called Bodyline series against Australia of 1932/33. As a result both Carr and Jardine’s cricketing careers were cut short; but they, unlike Larwood and Voce, had other comfortable options available – an observation which helps Lucas to underline the fact that unfairness in cricket has largely been a reflection of class-based unfairness in society at large. It could be argued however that the cricketing establishment managed to hold on to its privileges for some time after deferential attitudes began to crumble in the outside world during the 1960s.

Lucas’s well-researched stories acquire extra piquancy when they are set within the memory of his readers and reveal some behind-the-scenes incidents of which we were unaware of when we hero-worshipped the Test Match players of our childhood years. It is startling to learn, for example, that one England captain in the 1950s found it advantageous to turn himself into a Limited Company to help him manage various revenue streams (such as expenses and payments from newspapers) which he was permitted to have in spite of the fact that he was playing as an ‘amateur’.

Sometimes the game of cricket has been disturbed by serious political issues. In autumn 1968, shortly before an England tour of South Africa, the apartheid government of that country made it clear that the tour would be cancelled if the England squad were to include Basil D’Oliveira, a South African-born coloured player. Lucas is rightly scornful of attempts made by the selectors to kow-tow to the South African government by finding spurious excuses for leaving such a fine cricketer as D’Oliveira out of the team; and equally rightly he commends an awkward squad of three English players who refused to collude with such underhand manoeuvring and would not agree to being included in the team in D’Oliveira’s place.  (There were further episodes in the tangled story of English cricket’s relationship with the apartheid regime and Lucas gives a frank assessment of all of them.)

Lucas also has interesting things to say on tangential issues such as the role that cricket journalism has played in influencing the status of cricketers. This leads him to be fairly dismissive of the much admired writings of Neville Cardus. This criticism is chiefly on the grounds that Cardus tends to endorse values of the cricketing authorities rather than taking seriously the viewpoint of the professional players (but some lapses in Cardus’s prose style are also noted, with some relish). In contrast, Lucas admires the essays of John Arlott which reveal his sympathy for, and understanding of, the motivation of the average county cricketer who – in the main – has endured low pay and insecurity without resorting to ‘awkwardness’.

While Lucas has much to say about (the shortcomings of) county club administrators, he does not give much consideration to attitudes of rank and file members and supporters of these clubs. He does mention that pressure from these ordinary members helped the Warwickshire batsman Dennis Amiss to have his contract renewed in spite of the committee’s initial reluctance. But I am reliably informed that, during a 1968 general meeting, the Yorkshire committee – which had just been congratulating itself on a rise in membership – was thrown off balance by one of the new members saying that many had only joined in order to oppose the status quo represented by committee!  This event occurred during the dispute between the club and Ray Illingworth (reported by Lucas on p 182). Regrettably, it did not materially affect the outcome; but as an act of popular defiance it still seems worth recording for posterity. (It might be seen as prefiguring the current influx of Jeremy Corbyn supporters into the status quo of the Labour Party.)

This is a book which should appeal to most cricket-lovers (although many of them might welcome the addition of an index to help them revisit favourite passages). Lucas writes in a lively and humorous style, seldom forgetting that it is ultimately a game that he is talking about – albeit a game that has Laws rather than mere rules. The book is at its most entertaining when dealing with specific instances of bad behaviour by particular individuals. Lucas is capable of a lively turn of phrase in such passages – as when he refers to the joyless boot-faced regime presided over by one former England captain. In a similar vein he gives an eloquent rehearsal of the character flaws of a certain Yorkshire and English opening batsman (now a broadcasting commentator).  I’m afraid I cannot imagine these particular pages meeting with the approval of London Grip poet F M Brown (who was the spokesperson for rank and file discontent at the above-mentioned 1968 Yorkshire meeting) – but I do see the rest of the book getting a nod of appreciation!

[*On the day that this review was published the England team lost the final test match of the Ashes series and once again failed to display much evidence of resilience or resolve.]