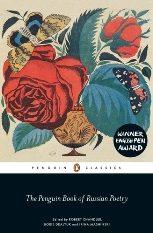 Editors of anthologies nearly always seek to explain why there is a need for a new selection of poems in their chosen field. Robert Chandler is no exception. In his introduction to this handsomely produced and richly packed volume which he has co-edited with Boris Dralyuk and Irina Mashinski he claims that there is a clear need for a new anthology of Russian poetry in translation. In this case there is no sense of special pleading. While there may be various anthologies which are devoted to different periods of Russian verse or which look at things from a certain perspective, there are precious few that cover the entire period for the non-specialist. Indeed, this collection’s predecessor was Dmitri Obolensky’s Penguin Book of Russian Verse which was first published in 1962. Long out of print, the original edition was repackaged as The Heritage of Russian Verse and published by Indiana University Press in 1976. Interestingly, the Penguin edition was part of a wonderful series of bilingual anthologies of European poetry, published throughout the 1960s, which contained the original texts with, at the foot of each page, a plain prose translation. This was, of course, a format ideally suited to readers with some level of linguistic proficiency and whose primary concern was an engagement with the original text. It is perhaps a reflection of the parlous state of Modern Languages in our universities that by and large these volumes have ceased to be republished. Realistically, though, it is only likely to be a small number of readers who will aspire to any kind of proficiency in Russian, so the need for a volume like the present one would seem self-evident.

A lack of linguistic knowledge is one thing, but the readers of these translations will need more than a careful selection of texts if they are to find their way through what for many of them will be terra incognita. Fortunately, they are well served by an extensive historical, biographical and literary apparatus. From the outset, a brief ‘Chronology’ encapsulates Russian history and distils its tragic essence: from the Napoleonic Invasion, the Decembrist Uprising, the emancipation of the serfs and then the first rumblings of the revolution in 1905, which led ultimately to Stalin’s purges. One may or not agree with Auden’s pronouncement that Poetry makes nothing happen, but Russian poets have, at the very least, been affected by historical events in ways that it is hard for their fellows in the West to imagine: from censorship and exile at one extreme to imprisonment and death at the other. In fact, more often than not, given the language barrier, it has been the lives of the poets rather than their work that have captured the imagination of foreigners. Pushkin and Lermontov, Byronic figures from the Nineteenth Century, died fighting duels. Mandelstam died in the Gulag. Akhmatova and Pasternak were hounded. Mayakovsky and Yesenin committed suicide. Indeed, the detailed and absorbing biographies that preface each poet’s work constitute one of the many pleasures provided by this anthology. They set the scene and enable the uninitiated to find their way through the complexities of Russian literary history with its plethora of schools and manifestos. Beyond that, however, one can’t help but be gripped by the dramas and personal relationships of the poets themselves. One should mention, finally, that that there is a comprehensive bibliography and a substantial set of notes on individual poems.

Against a backdrop of what Stephen Dedalus in Ulysses called the nightmare of history poetry has not only survived in Russia but has assumed an importance that places it at the heart of Russian culture, something that is not always appreciated by those who view it from the outside. For these it is probably Tolstoy, Dostoevsky and Chekhov or, more recently, Solzhenitsyn who may seem the main figures; while for those at home it is the poet Alexander Pushkin who is unquestionably their greatest writer. Moreover, Chandler also hints at a major difference between Anglo-Saxon and Russian expectations where poetry is concerned. In the opening paragraph of his introduction he describes a friend’s surprise on learning that Mayakovsky – the Poet of the Russian Revolution – always wrote in rhyme and metre; yet Russian is very different idiom from English. A highly inflected language in which it is relatively easy to rhyme, it has a rich phonology based on the distinction between palatal and velar consonants. Its cadences are polysyllabic and highly musical. For Russians it seems perfectly natural to write ‘modern poetry’ in traditional metre and rhyme. Moreover, during the years of terror when to write a poem down, let alone publish it, could lead to imprisonment or execution, the sheer memorability of poetry meant that it survived as an unsupervised oral tradition.

A brief perusal of this anthology’s contents reveals that, apart from an oral tradition which is not covered here, Russian poetry only got going in the Eighteenth Century, so that there is no Russian Chaucer, no Renaissance sonneteers, no Jacobean Age and, just as Peter the Great built St Petersburg with the help of European engineers and architects, Russian literature was created in the same century based on French, German and English models. Indeed from Ivan Krylov and Vasily Zhukovsky right up to Pasternak the art of translation has held an honourable place in the Russian poetic tradition. As far as the translations included here are concerned, the editors have erred, rightly, on the side of caution. Given that this anthology is likely to be around for a long time, the translations needed are those that are gimmick-free, convey meaning accurately yet read well. Although the editors do seem to have something of a penchant for Lallans, with versions of Mayakovsky by Edwin Morgan and Afanasy Fet by Hugh McDiarmaid, they have avoided the temptation of bringing in wildly free versions by celebrity poets.

Referring again to the contents, the broad lines of development are clear. The Eighteenth Century is represented by two poets: Gavrila Derzhavin and Ivan Krylov. The former is a baroque classicist whose poem ‘God’ was translated into Mandarin and Japanese and was widely discussed in Europe. His paraphrase of Psalm 82, ‘To Judges and Rulers’, which was censored, hints at the political upheavals to come: Arise ye Ruler of the righteous! / Give ear unto the men of worth. / Come judge the wicked and the spiteful, / and Thou alone be King of Earth! Ivan Krylov started by imitating some of La Fontaine’s fables and then composed his own in a more obviously Russian vein. However, the central importance of Pushkin is highlighted in the next three sections, which are named respectively: ‘Around Pushkin’, ‘Pushkin’, and ‘After Pushkin’. For Anglophone readers this is a period represented by our own Romantic and Victorian eras.

As an example of how the editors have tried to balance the formal qualities of Russian versification against the necessity of producing something that works in English here is the opening stanza of ‘Autumn’ by Yevgeny Baratynsky. Following a tradition that goes back to Vergil’s Georgics, it’s a poem that might also be compared with Keats and Wordsworth:

A longish poem of sixteen ten-lined stanzas, it is unlikely that any attempt to replicate the original’s rhyme scheme would work in English. Here, however, a more flexible approach based on rhyme and assonance and a fairly regular metre allows Peter France scope to capture both the spirit of the original and some of its formal properties. Alexander Pushkin’s own ‘Autumn (A Fragment)’ is also impressively rendered by the same translator: The tone here is more directly personal than in Baratynsky’s poem and, on this occasion, France has allowed himself even more freedom without abandoning all attempts at echoing the rhyme scheme:

The original rhymes abababcc. France scarcely hints at this, but does clinch each stanza with a couplet using some form of rhyme, half rhyme, or assonance: furs/squeeze; pleasure/slumber; wine/reign. Even though, like some of our own Romantics, Pushkin died prematurely, he did leave a substantial body of poetry in many genres alongside his work in prose. The thirty pages devoted to him here can only hint at his scope. Chandler’s own lightly rhymed version of one of his most famous lyrics goes some way to capturing its poignancy:

If Pushkin is the greatest poet of what the Russians call their ‘Golden Age’, he is far from being a lone voice. Along with Baratynsky, there are Fyodor Tyutchev, Mikhail Lermontov – best known elsewhere for his novel, A Hero of our Times – Afanasy Fet, Nikolay Nekrasov, and others, all of whom are considered immortal by the Russians, albeit virtually unknown beyond their borders.

Unsurprisingly, the twentieth century is well represented. Sixty poets have been selected, of whom the most familiar names for the English reader will be those who, for the Russians, are the cream of their ‘Silver Age’: Blok, Akhmatova, Pasternak, Mandelstam, Tsvetaeva, names more well known, perhaps, for what they endured than what they wrote. Given the constraints of space, one can only hint at the body of work contained here. Innokenty Annensky was the standard bearer of Symbolism, of which Alexander Blok became the most famous exponent. Less well known, Mikhail Kuzmin had a profound belief in the mystical power of the word, was politically outspoken and yet, astonishingly, escaped arrest or execution. Here are the opening lines of ‘Terror’:

Nikolay Gumilyov, translator of Dante and one time husband of Akhmatova, was executed, but not before he became the leader of the Acmeists whose aims were similar to that of Pound and the Imagists. He influenced the early work of both Akhmatova and Osip Mandelstam. Here is one of the latter’s brief lyrics:

Ultimately, it was his epigram on Stalin that sent him to the Gulag and his death. The Penguin Book of Russian Poetry is a stunning anthology. It is a treasure house of poetic riches and a monument to the lives of those who created them. Let’s leave the last word to Boris Pasternak who, if not unscarred, did at least manage to survive into his old age. Here are the opening stanzas of Hamlet:

David Cooke’s retrospective collection, In the Distance, was published in 2011 by Night Publishing. A new collection, Work Horses, was published by Ward Wood in 2012. His poems and reviews have appeared in the UK, Ireland and beyond in journals such as Agenda, The Bow Wow Shop, The Interpreter’s House, The Irish Press, The London Magazine, Magma, The Morning Star The North, Poetry Ireland Review, Poetry Salzburg Review, The Reader, The SHOp & Stand. He has two collections forthcoming: A Murmuration (Two Rivers Press, 2015) and After Hours (Cultured Llama Press 2017).