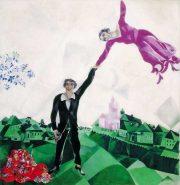 With their green goats, giant roosters and bridal couples flying through the air, Marc Chagall’s works appear fantastic, but he insisted he only painted direct reminiscences of his own life.

The twist is that, for Chagall, reminiscences are about throwing down associations on to canvas in triumphant colour, rather than delivering any straightforward, chronological narrative.

But even if this is not autobiography at its simplest, Chagall’s immediate, often joyful emotional appeal explains the size of the crowds flocking to the Chagall Retrospective in Brussels that brings together 200 works from around the world.

They are accompanied by a catalogue that includes previously unpublished extracts from Chagall’s non-linear memoir, which was intended as the sequel to his autobiographical work “Ma Vie”, published in 1923.

His long life (1887-1985) coincided with the convulsions of World War I and II and the attempt to annihilate the Jewish culture and identity that defines his work.

The Fall of the Angel, with its blood-red angel and anguished Rabbi carrying away the Torah scrolls, urgently depicts the Jewish tragedy.

But Chagall’s intense emotions are universal.

Birthday, painted just before he married Bella, is completely engaging as an expression of fulfilled love that literally sweeps the couple off their feet and into the air above the domestic detail and a carpet, red for passion not blood.  As if implying no contortion is too much, the man’s head is twisted back to kiss his bride.

Painted on the couple’s honeymoon, The Poet Reclining conveys a deep harmony.  Chagall remembered the setting in the Russian countryside as a place of solitude and pine trees, which he painted in dense, black-green against a lilac sky that no post-card reproduction could ever convey.

Beyond the love for Bella, which this master of colour described as the colour and meaning of his life, the quiet mood and gentle tones of The Small Drawing Room, or my Grandfather’s Drawing Room, has the calm atmosphere anyone might associate with memories of beloved grandparents, not just Chagall’s own grandparents in his native Belarus.

In his adoptive France, Chagall was the outsider, riling the conservative establishment with his irreverent humour and juxtaposition of French heritage and Russian folk Jewish tradition.

He personifies the Eiffel Tower as a pipe-smoking harlequin standing high, like a circus performer, on a green and blue donkey, which is also carrying a rooster on his back and wearing shoes and socks.

Worse of all, for his chauvinistic critics, Minister of Culture Andre Malraux’s choice of Chagall to paint the ceiling of the neo-Baroque Opera Garnier was an outrage – until they saw the result and it became the benchmark for integrating modernism into France’s historic landmarks.

Its strength lies in its spontaneity and the blend of colour, which as Picasso noted, Chagall understood perfectly, or as Chagall expressed it: “All colours are the friends of their neighbours and lovers of their opposites”.

The exhibition rounds off with sketches for the Garnier ceiling that give a hint of the gorgeousness of the real thing, whose already high visitor numbers may increase a little further as a result of this hugely popular Chagall Retrospective. 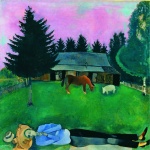 The Passover Files The Penguin Book of Russian Poetry