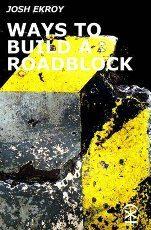 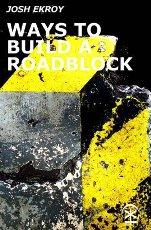 It is easy to pick out some splendidly bravura passages in Josh Ekroy’s debut collection Ways to Build a Roadblock.   In ‘Lord Hutton Reports’ (on the Humpty Dumpty incident) we learn that

‘Kafka’s Recipe for Boiled Cabbage’ begins with the ominous warning First you must obtain a permit for the possession of a cabbage; and in ‘Rafah’ we meet a spokesman who is both brazen and inarticulate:

In such poems Ekroy sets out to satirise the convoluted attitudes and double-speak of contemporary politicians facing (or trying not to face) their own inadequacies and failings in the realm of foreign policy and military strategy.  A more subtle but still deadly thrust comes in the book’s opening poem ‘From the Golfcart’.  Its first stanza deals with the distraction tactics used by the male Empid Fly to mate with the much larger female without fear of being eaten himself while the second – without making any explicit connection – describes Tony Blair’s demeanour during his meeting with George Bush just before the 2003 Iraq War.

Ekroy is not only concerned with lampooning or exposing authority figures’ attempts to justify or conceal actions they fear may be indefensible.  His poems frequently deal with the consequences of those actions both for military personnel and civilians.  He is particularly good at creating shock by using matter-of-fact descriptions of situations that will be unfamiliar to most of his readers.  A good example is the title poem on building a roadblock in which we are told that the best way

is to use a tall wardrobe.  It should have
a mirror which you angle to the sun
to dazzle any road user.
…

Wait for him to greet you. If he uses
the wrong word at once set him to work
to dig his own grave.

Similarly, in ‘SAMs’, we get some graphic but understated details about being a pilot who is shot down – the ejection seat can amputate / if things don’t work just perfect; and in ‘Some Useful Phrases’ the simple sentence I have run out of petrol acquires a worrying significance.

As well as placing ordinary words in unusual and threatening contexts, Ekroy can make good use of unfamiliar vocabulary.  ‘Shades’ is couched in what may (or may not) be authentic army slang which makes all too clear the casually brutalising nature of life as a junior soldier (a ‘shade’).  Shades don’t walk, they slink or sidle – otherwise they must expect a good slackering.  They must show respect to their seniors or get skelted in the bird parlour.  Then at the end of the poem the smug voice of authority re-appears: Of course there is none of this in our regiment.  The same kind of male bonding is shockingly expressed in plainer English in ‘Brotherhood’:  At first sight I love him so much / I have him well beaten up.  Other poems gain their effect by playing with syntax: ‘Rafah’, as already quoted, makes extensive use of broken sentences; and ‘Recruitment’ features some unsettling misplacement of adverbs and conjunctions: The pit-bull is loose on the certainly parade ground / muzzle loosely fastened with ifs.

The poems are not concerned only with physical or psychological done to westerners.  ‘Guided Tour’ is a well-made sestina in the voice of an Iraqi.  The poem’s formality is not made too obvious but the word repetitions enhance the impression of one whose English is limited. This poem is brave enough to ventures into issues of differences between Sunni and Shia:

The Shia are cunning and have thicker blood,
Sunnis have hooded eyes and move, English,
with their feet flapping their sandals.

We hear Iraqi or Afghani voices again – but this time expectant and puzzled – in ‘Waiting for the Americans’ (modelled on Cavafy’s ‘Waiting for the Barbarians’); and civilian casualties are the subject of ‘Like Dense Cotton it Started to Burn’ a grim pantoum about injuries caused by phosphorous shells. This begins and ends with a refrain that recurs throughout the book There is no need for an investigation.

Surrealism as yet another tool with which Ekroy probes his subject matter:  He offers us an almost-love song about a rifle; a pair of poems in which a pine tree and a horse offer themselves as presidential candidates; and – most bizarrely of all – a piece entitled ‘Saddam Hussein’s Overbite Speaks’.

Ways to Build a Roadblock is undoubtedly and strong and highly original first collection.  Ekroy’s willingness to focus on the political is welcome; but one might wonder whether he will, in future, be able to broaden his range.  Fortunately, there is reason to hope that he will, since the present collection does include several poems which feel more personal and reminiscent.  These too have some darkish undertones but they still make a pleasing contrast to the grimmer pieces which surround them.  They include what seem to be childhood recollections about intimidating aunts (they’d eat anything with a face) and destructive games with old 78 rpm records (The Vienna Boys’ Choir was stung / into silence in the nettle patch).  Particularly mysterious is the poem ‘Goldfinches’ which begins

In my family there were always plenty of goldfinches.
Ma had to hire a man to disinfect
behind the hockey prints

As the poem proceeds, the recurring term ‘goldfinches’ seems to act as a dummy variable for which the reader may substitute any half-desirable, half threatening object.

There are several other poems in the collection which strike me as being as opaque as ‘Goldfinches’; but one of them, entitled ‘R&R’, does score an authentic direct hit when a metallic smell recalls the taste of the new Dinky toy / I loved to suck on.  For men of a certain age, this will surely evoke a long-forgotten mouth-sensation.