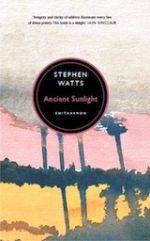 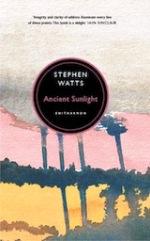 What comes to mind when you think of ancient sunlight?  Do you imagine Mediterranean sunbeams slanting through an olive grove?  Shadows jagging down an Andean peak?  If you are Stephen Watts, poet, translator and editor, ancient sunlight is where poetry & language come from and he is as likely to find it in London’s Docklands as in the Hebrides where he used to work as a shepherd.

His collection Ancient Sunlight (Enitharmon, 2014) starts on the Aran Islands off Galway with a beautiful piece about a visit to an old friend. He plays with time:

it
was a lovely five miles, though it took me
fifty years.

At the mid-point comes one of those stillnesses only poetry can achieve:

above Corruch where I walked into silence
and spoke with horses and lay down asleep
in all of those fourteen thousand little fields
each with its waterbed and drift of flowers.
It was quiet there.  I heard silence swarming.

The collection has two main themes. His first is language and its paradoxical power to divide us and bring us together.  Nobody knows this better than a translator. From ‘A Little Message To My Friend Rumi’:

Watts has worked among multi-lingual schoolchildren in Tower Hamlets looking at how languages rub up against each other and can’t help these grim lines in ‘Birds of East London’:

Yet that first Galway poem ends in a positive flourish:

.          This is what I came here for;
these words, the stone sleepers, language
that matters, language that can say “yes”

And ‘Meditation At The Window’ spells out with powerful use of rhyme what could be Watts’s credo:

But I want to say poetry is vital art, pumping bright
blood through our heart, poetry is laughter, poetry is
breath. Poetry’s a translation out of silence and, for
sure, translation’s the opposite of making war.

The poet’s second theme is the invigorating variety of us all and he handles this with Whitman-esque verve in long pieces reminiscent of Leaves of Grass, always celebrating in particular our talent for exile and assimilation. ‘Watney Market, October 2006’ encapsulates his love of East London, his home for the past thirty years, and catches the overseas cadences on his page:

Watts is always aware of his scattered roots, especially those his family left behind in the Italian Alps during the Second World War. In ‘My Grandfather Worked In Pizza Express’ we learn that the Greek Street pizza place used to be an Italian Crameri and coffee shop.  Off he goes down a rabbit hole of memories and how the twentieth century made exile a necessary virtue:

The waitress brings him back to the present, asking if he’d like coffee. All time has become one and all he can say –

One of several magnificent long poems in the collection, ‘Old Women Of My Childhoods’, fleshes out the poet’s origins:

My grandmother
Was an economic migrant in time of war
Losing two babies at the border post
To the fiction of disease and
Unnecessary papers.
Is that what is meant by asylum?

‘Asylum’ there is wordplay. In many of the poems, especially the wonderful ‘Time: Its Rhapsody’, Watts is frank about the contradictions of what we call sanity:

That funny little poem ‘A Little Message To My Friend Rumi’has its take on this too:

His technique of swerving between contradictions is at the core of Watts’s talent: he takes us along an exquisitely poetic route, especially when he is painting one of his wide canvasses celebrating all our differences, then yanks the wheel and we’re unbalanced.  Occasionally we’re off into a mystical whirl where other poets might not dare to go. For example, ‘But now I live on a sorrowful planet’ (Frida Kahlo’s line becomes Watts’s title) is a list of things he ‘should’ have done:

… until language takes his hand and leads him into a dance:

Similarly ‘Birds of East London’ takes us into mental breakdown on the twenty-first floor of a tower in Shadwell, among collar-doves, kestrels, cormorants and gannets, where the whole sky is king-fissure blue, and out of such skies come birds and bombs:

Then we find the old Ukrainian man twelve floors down who keeps racing pigeons on his balcony and we are anchored in tenderness:

Watts weaves skilfully into a single poetry collection reflections on all our lives, all suffering, all dreams, all ages, all recovery, all love. It is the work of an enormously generous heart and once I grew comfortable with the dizzying switchback effects, I loved the ride.