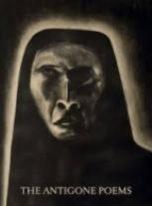 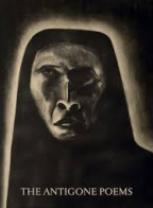 Two tales infuse this collection of poems and charcoal drawings. The first is that of Antigone herself, daughter of Oedipus by his mother Jocasta. As told by Sophocles, her brothers killed each other in a bitter civil war over the inheritance of the throne of Thebes. Neither was a paragon but their uncle, Creon – now ruler – gave Eteocles a proper burial while Polynices’ body, to set an example to the nation, was thrown out to rot in the desert. Antigone defied Creon, both to uphold religious duty and to honour her brother, and gave proper last rites to the body. Creon condemned her to death by immuration, but his insistence on law-and-order led to either law nor order: Antigone, Creon’s wife Eurydice, his son Haemon (Antigone’s betrothed) all commit suicide, Creon himself overthrown to end the House of Oedipus.

The second story is the origin of this book, rather more obscure than the classic morality tale for which it is named. Marie Slaight and Terrence Tasker founded an art studio in the early 1980s named Altaire Productions and Publications, a venue for independent artists in the written and visual arts. Tasker died in 1992 at the age of 45, and the company moved to Australia where Michael Tasker, a son perhaps, is the Publication Manager (www.altaireproductions.com).  The poems, we learn, were written in the 1970s. The launch of both artists’ work some three decades on may be related to Tasker’s premature death: the book is dedicated to him. The relationship to the Antigone saga, however, is in synecdoche, a woman’s voice of torment and rage. According to the press release: ‘a bold retelling of the ancient tale of defiance…an intensely personal invocation of the ancient Greek tragedy…’.

The book is lovingly made: thick stock, elegant font, handsomely bound, substantial to the touch. Oddly, each verso page is entirely blank (but for the Roman numeral page number). Six charcoal drawings, including the cover, are interspersed among the poems: haunting, resembling African masks. The thirty-five poems, one to a recto page and arranged over five ‘chapters’, are nearly all in Sapphic or haiku-like fragments, one as brief as seven words. They are demonic, unrelieved, driven. Line and stanza breaks are meant to heighten the cry. A randomly opened page reveals:

In one long stream-of-consciousness three-stanza prose poem is a masochistic
evocation, writhing as if Leyda to Zeus’s swan:

I only want to purge of godawful pain– so close to losing me– he
has to grip– he’s so– what– movement is stronger, hotter, my entire
body– where’s the sun– where is he– he’s not afraid, he knows, he
penetrates, he’s a fool– to leave me alone– heat’s stronger, I’m
pulsing– waves of pain, pleasure– I’m his, what of it– thank god–
it’s time– I can’t grow until he returns– sunlove– again, where is
he– I wish he would burn– my only love today was the sun– I was
in love when the sun took me– now it’s gone– I’m cold…

After such soaring, however, the final poem crashes down to bathetic resignation:

.   To live all lives, all deaths, encompass all women.

.   To smash every confine.

.   I have written a few words

.   I live at the corner of St. Lawrence and Pine.

It is as if Antigone had shrugged, gone home to knit, watch television.

The book has received rapturous reviews in major outlets. I regret to differ.

Norbert Hirschhorn  is a poet and critic whose website can be found at www.bertzpoet.com