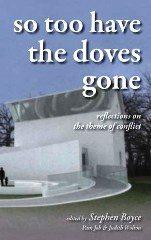 so too have the doves gone: 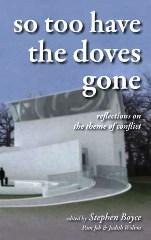 This anthology, inspired by the Wilfred Owen Memorial at Ors, is published in the centenary year of World War One.  Already, the Paxmans and the Goves are saying that ‘we’ absolutely had to fight that war, but, thankfully, most poets are not convinced.

The book is lavishly illustrated.  The contributors range from some established poets to a schoolgirl of thirteen who identifies with the mother of a man ‘shot at dawn’.  Quality and style vary widely, from Josh Ekroy’s sophisticated parables to ‘Ballad of 2014’:

The last living soldier said it’s ‘organised murder’
So why celebrate it any further? –

words that sound a good deal better sung than read.

As the editor says, ‘what, sadly, could be more universal, timeless or timely than the theme of conflict?’  Peter Sandberg’s ‘No Defence’ links the Trojan war, Pontius Pilate and Tony Blair.  Rodney Pybus reminds us that it was ‘our’ side which invented concentration camps.  Josh Ekroy places Achilles in Helmand.  Several poems are by, and concern women, who are notably more pacific than men.  Karen Dennison writes about their suffering in wartime:

I have stood in overgrown queues for bread.
I have waited in snow and ice and rain.
I have prayed for the dying and the dead.

I have ached for a son’s return in vain.
I have looked into the lifeless eyes
of the living, seen the strong insane.

Suzanne Conway shows a modern man ordering a woman to shut up.  Presumably that’s why Alex Toms’ poem, ‘Miss Potter and the Mushrooms’, is included; this isn’t about war but shows how a  talented woman cannot get men to take her seriously.

Poetry in 1914-18 regularly appeared in the daily papers and was more straightforward, and therefore much more popular, than it is now.  Many of these poems are refreshingly simple and remind me of how the Georgians were writing at around that time.    Oliver King’s ‘A Joinery’ uses the imagery of wood and nails to meditate on how war damages those who take part in it:

Great noises end with silence, the hammer’s put away,
but what is bent by savagery can never be made good.
Though violence passes finally, this monument will stay;
a nail firmly planted here, forever in the wood.

Martin Newell’s skilful rhymes are about remembrance, and also about how we now observe war at one remove, on TV:

A gung-ho newsman on the television
In self-important bullying semi-dark
With barely-bridled relish, talks of tactics
Astride a giant model of Iraq
A line of virtual tanks take up position
And flash up gold explosions on attack
If science can put missiles through a cat-flap
It won’t bring poor Mohammed’s daughter back ….

‘You betcha melted boots we’re coming, mister.
A war is best held fresh or it’ll spoil
You gotta go in hard to burst a blister
Especially if that blister’s full of oil’.
Poor Mohammed held his daughter, kissed her
Brushed the blood and dust from matted hair
Noting that her body seemed much lighter
Never seeing the camera clicking there.

That is ‘Poor Mohammed’s Daughter’, a sobering poem for our time.