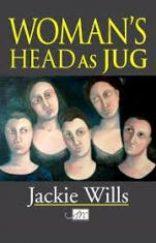 Norbert Hirschhorn finds a strong and distinctive voice and character running through the new collection by Jackie Wills. 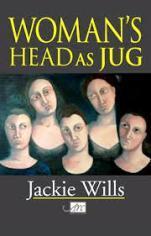 ‘Woman’s Head as Jug’ is Jackie Wills’s fifth collection, the fourth with Arc Publications. She was short-listed in 1995 for the T.S. Eliot Prize, and in 2004 nominated by Mslexia Magazine as one of ten top women poets of the decade. In short, we expect much pleasure from any new work of hers, and this collection seldom disappoints.

The book is divided into four sections, each with its own dominant theme and arc.  It’s been argued that a single theme and trajectory should cover an entire collection, but Wills’s character and style – her voice – serve the writer and reader well here. To paraphrase  Ezra Pound, “More poets fail from lack of character than lack of technique.”

The first section of Wills’s collection is a paean to archetypes of tough, hard-working, no-nonsense women.  The itinerant labouring woman (‘A Lone Leaping Woman’)

landless – she picks up days
of work like kindling

only the river curves
around her shoulder

(I grope the impossible pile of clothes,
unleash armpits, urine and cigarettes.)

The ‘Ale-Wife’ is a jeu d’esprit, as the alewife is a species of fish.  Here the fishing persona of the poem and the fish share an intimacy, animal to animal:

He turns on a gulp,
his mouth opening
once too often,

and I am the strum, venturer,
a night worm
for his empty palm.

glimmering with a canal
stopped at midsummer.
He puts each coin

on the bar so carefully,
sliding me the gold of a day
he replays and replays.

The language is indirect, allusive, ‘telling it slant’ – hints here of payment to the oarsman of Hades, Charon’s obol.  Thus the short lyric allows layers of meaning and association, requiring and deserving the reader’s concentration.

The poems in the second section engage a woman with nature, and woman as nature: ‘Calanque’ is the straightforward narrative of diving into a secluded pool to join a shoal of fish fifty at least,/ silver, black and yellow feeding off the weeds. In ‘The Seal’s Goodbye’ – His kisses, soft as anemones, dab liner from my cheeks [what a wonderful sound and simile, that ‘soft as anemones’].  The title poem (taken from the painting by Jane Fordham that adorns the cover) has woman as Good Witch Apothecary:

Today she pours the Water of Life – green
walnuts picked in June, beaten with a pestle.

She steeps pounds of rue for Plague Water,
and to clear ‘mists and clouds of the head’

infuses peacock dung and bruised millipedes
in spirit of lavender.  Bending over a bowl

she might empty a reservoir, reveal the valley it invaded.
Her head is fired from the same earth.

Two poems in this section strike me as clever but ‘over-egging the pudding’, and might better have been left out. ‘Words for Women’ is an abecedarian of what women have been called through the ages, all the words in a solid block run together in upper case and across line breaks to take up the whole page; from

‘Female Ancestor’ begins with ‘My’ and continues with 51 lines of the word ‘mother’s’, nine to a line, ending in ‘mother.’ That is, 461 ancestor women. At, say, 20-25 years per generation, the poet laboriously traces ancestry back about 10,000 years, the dawn of civilisation.

The third section is titled, ‘Sweats’ and is ‘about’ menopause, but always with indirection.  Elephants too, the poet tells us, go through menopause, whose symptoms though difficult to measure include the pressure or tightness in head or body,/ attacks of panic, the loss of interest “in most things”.  ‘Four [Male] Professors at the Menopause Symposium’ are like large cranes, tapping the woman with their beaks.  A bitter note is sounded in ‘Atrophy’, no goddess Diana here:

She crouches and tilts
a magnifying mirror
to examine the fissures
that have appeared in her flesh.

Unlike the moon,
whose rilles
were magnificent rivers of lava,
she is eroding.

The poems, ‘Moults’ and ‘The Change’ found in the second section could also have been placed here.

The final section comprises a series of vignettes of the poet’s life and neighborhood, rather more directly spoken, ranging from a removal of junk from a low-life house to a face-to-face encounter with a rat, on the day before my first born moves out.

Ultimately, the collection reveals the poet’s voice: feminist, female, progenitor, and human heir to both generation and decay. It’s not a coincidence that the final poem is about those splendid, black ‘Funeral Horses’ delivering their loads to the chapel and grave, after which the woman groom murmurs,/ they nod, she puts her hands to their mouths,/ they take a slice of apple, lick salt from her palm.

Norbert Hirschhorn is a physician commended by President Bill Clinton as an ‘American Health Hero.’ He lives in London and Beirut.  His poems appear in four full collections – most recently To Sing Away the Darkest Days and Monastery of the Moon.  See www.bertzpoet.com