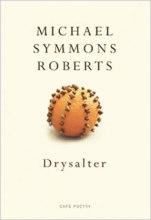 Michael Bartholomew-Biggs does his best to give an adequate appreciation of a dense, complex and rewarding collection.

It has not been easy to write a review that does justice to the latest Michael Symmons Roberts collection Drysalter. This is partly a matter of its overall length: it is about two and half times the size of a typical 60-page collection.  And even though the poems are all quite short – precisely fifteen lines – many of them seem to have weight and significance enough on their own to warrant a small dissertation.  Furthermore, this substantial content is delivered using language, imagery and craft in ways that surprise and delight.

In terms of form, Roberts finds many ways to shape his fifteen-liners.  They almost always have a regular stanza structure – perhaps seven couplets and a singleton or stranger patterns like 7-1-7 or 1-13-1. Three and five-line stanzas are perhaps the most common; but these appear with both long and short lines and are sometimes rhymed or half-rhymed.  There are examples of pure terza rima and some interesting variations – as in ‘A plea for clemency’ where it seems to be combined with elements of villanelle.  I also enjoyed the unusual rhyme scheme abc abc abc  used in  ‘Poem from a line by Osip Mandelstam’.

The first few pages of the collection introduce themes and references to which Roberts keeps returning.  The opening poem ‘World into fragments’ is a kind of thought-experiment – how might it be if the world shattered into pieces?   Such what-if speculations continue throughout the book; and indeed this particular one is reversed in the final poem ‘Fragments into world’ which imagines a broken world reassembling itself.  ‘World into fragments’ – as vivid as a CGI simulation – also features the first of many oblique scripture references – we see for real as if through mud and spit (cf John 9:6). Later, we meet trees that take up their roots and walk and are reminded of the possibility that we may hear a still, small voice and not like what it says.  Elsewhere too, we meet the mysterious words written by the moving finger on King Belshazzar’s wall (Daniel 5:25) whose would-be interpreters / are pushed at gunpoint through the hall.

Themes of finance and economics also appear quite early in the book and are often revisited.  In ‘Derivatives’, commodity trading intrudes upon human emotion – I love you more than coffee, sugar, salt / and know that worth will grow – and it coldly confuses ‘living’ and ‘being possessed’ in the observation that pork bellies swing beneath their current /owners.  Roberts imagines a threatening and alien environment in which there is a word we must not say … newsreaders /with currency updates breathe it // between yen and dollar.  Subsequent poems often convey a sense of being dominated by invisible forces.  In ‘A plea for clemency’, Roberts begs the agents and engines of despair to work slowly and rent me a hotel room, lend me one more night.  These forces are perhaps the financial imperatives of ‘the market’, working rather as ‘the machine’ does in R.S. Thomas’s poetry.  (But, unlike Thomas, Roberts does also acknowledge the existence of agents and engines of repair – which are surely needed while gaps between rich and poor are such that one can imagine the wealthy saying the filthier their water the sharper our vodka.)  Yet he is not so over-awed that he is incapable of humour.  In ‘The offset’ he imagines a bad bank to protect me / from my toxic debts and staffs it with bad tellers, bad guards and a bad manager who weeps into his coffee for his lost career.

Other reviews have made particular mention of the repeated appearance of zoos in the poems.  But hotels appear just as frequently; and there are many other themes, images and ideas to which the poems return again and again. There are several hymns directed to such unlikely objects as a photo booth or a roller-coaster and there are portraits of ‘the psalmist’ (= the poet himself?) in a variety of situations such as mid-life or utter darkness. In the poem sequence ‘The Wounds’ there is a hauntingly recurring image of Christ which echoes the dead pilot from Golding’s The Lord of the Flies. Prayer is often uttered. Sometimes it speaks itself; but sometimes it requires as much work as painting prayers // across the walls. But even this degree of effort may end in failure: I go on daubing words across my house / to ‘deliver us from’ then I run out of space. And when prayers are finally completed they may not produce the expected answer:  This was not the rescue plan / I had in mind. Please reconsider. No, recant. Here, as in other poems, we are reminded of the risk of unintended consequences arising because spells were mistaken for jokes or when locks loosen without key or cause.

Roberts’ imagination and inventiveness are not confined to the relatively few recurring topics we have mentioned. The originality and breadth of his vision is well illustrated by the reversal of viewpoint in ‘Night train’ where, instead of considering the view out of the train window, he imagines the train is lit / to make of us and it an eel-shaped full // vivarium to show the wild hills what/ a world can be.  And there are many smaller surprises: one poem briefly recalls Pink Floyd’s Shine on you crazy diamond; another seems to conflate the aging King David and Father Christmas; a third consists entirely of a parenthetical remark in the middle of a five-word sentence; and a fourth delightfully likens blizzards to vanilla swarms of fat fees.

Amid all this richness of language and theme there is a sense that the book is offering something even more substantial than very good poetry.  These are poems which make us think because they give a powerful impression of having been created out of deep and careful thought.  I found that I wanted to read them only a few at a time so that each one had a chance to stay with me and continue to resonate.  And even when I had finished the book – in the sense of having reached the last page – I did not feel as if it had finished with me.