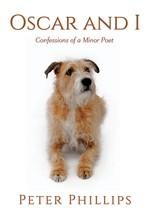 Oscar and I by Peter Phillips 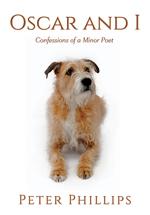 In the last few years, in magazines and at readings and festivals, Peter Phillips has been introducing audiences to the “minor poet” George Meadows.  The new collection Oscar and I gives a more complete account of George’s successes and misfortunes.  Most of the poems take the form of overheard conversations in which George discusses life’s complications with his wife, his publisher, various editors, fellow-poets and students.  Occasionally too we hear him chatting with Oscar, an adopted stray dog who was found at the side of the road in Bloomsbury (where he may or may not have been looking at the stars).

These little dialogues give plenty of opportunity for the observant and wry humour for which Phillips has become well-known in his previous three books.   Many poets will catch a ring of truth in the story of a dinner party guest who, having heard that George writes poetry, asks him: What’s your real job?   And many editors and tutors will sympathise with George’s disappointment when his students seem to feel / because it’s true it’s got to go in the poem.  George is truthful enough about himself when declining an invitation to be a competition judge:

The trouble is, I’d tend to discard
all those highly polished poems,
especially if I prefer what’s being said
over how it’s written.

But one can only speculate how much truth there is in the following imagined dialogue between George and the editor of ‘Poetry Comment’ about a reviewing vacancy:

Er … I realise I need to give an honest opinion,
with examples from the poems, and now and again
to add spice, I’d be gratuitously rude. That’s what
most magazines want, don’t they?

It would be totally unacceptable here.

Why are you touching your nose?
Oh I understand, wink, wink.
Yes, plenty of rudeness, no extra charge.

Meeting George over an extended sequence reveals several things about him – such as his attachment to Oscar – that I had not deduced from his previous single poem appearances.  He is, for instance, evidently somewhat better known than I had given him credit for: he seems to have fairly easy access to the literary festival circuit and admits to getting five or six readings a month.  On the other hand – as he tells his grandson – he’s not in the Premier League.  (Asked whether he is in the Championship he merely admits to hoping not to be relegated.)

George is also somewhat older than I had imagined him; and his fondness for alcohol seems more worryingly serious and less of an affectation than I had thought.  To describe “real poetry” as three pints of beer/ followed by a bottle of wine might merely be a joking response to an audience member’s question; but do we detect a touch of desperation when an undertaking to deliver a case of Chilean Merlot when we’re next passing gets the response I don’t suppose you could pass this evening?

Although most of the poems deal with stand-alone episodes there is something of a narrative thread running through the book.  It begins when George’s nomination for a poetry prize raises hopes of a late boost to his career and also (possibly) provides the trigger for his mild flirtation with a magazine editor.  For about sixty pages, the collection bounces along quite merrily and freely around such events and non-events; but then a more serious note intrudes.  Phillips handles this transition rather well; and this delightful collection is made stronger by the extra elements of light and shade in its last ten or so pages.  I shall not give away any more of the plot except to say that we do, in the end, get a sample of George’s own poetry.  It proves to be rather good.