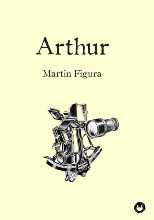 This sequence of poems charts the life of the eponymous Arthur.  The reader is invited to bear witness to the truth that a seemingly ordinary life can in fact be extraordinary.

Arthur’s life begins well enough. He has a happy childhood, shown in the first poems ‘Home’ and ‘Quest’.  A sense of security is evoked well by the repeated image of the child tucked up in bed.  I feel these two poems are strategic; they set up a perfect childhood that is abruptly curtailed when (as we learn in the following poems) his father not only goes off to war but is killed at Dunkirk.  Consequently Arthur must become “the man of the house” who “keeps the fire and digs the garden”.

It is Figura’s style never to make melodrama out of such life events. The father’s death, as with many other such tragedies in the character’s life, is presented to the reader indirectly “Some never reached the little boats at Dunkirk.”  This is a refreshing technique and suggests that some catastrophes simply cannot be expressed in words.

I found the relationship between mother and son particularly touching.  The poem ‘Music’ is a tender portrait of their shared grief. Again the sadness is subtly evoked by “His mother takes to quietness”.  Similarly their cello lessons come to represent an intimacy whereby “together they learn to bear the weight” of their grief.

The early death of his father and abrupt ending of his childhood prefigures the rest of his life.  Arthur is unable to join the navy because of flat feet.  A planned journey with his wife in a sail boat to exciting places never comes off.     Figura’s skill here is to present a character who is, for the most part, stoical.  It is this aspect of his nature we come to admire.  When rejected by the navy “Arthur decided if he couldn’t sail a ship, he’d drive a bus”.  The lack of self-pity and the matter-of-fact phrasing presents a man who rolls with life’s punches.  The poet further builds on the character’s optimism by emphasising the physical joy he derives from driving a bus when “the cool Bakelite steering wheel runs through his hands” and also his enjoyment at flirting with local farm girls as they “hand over hot pennies.”

Along the way, the sequence of poems shows Arthur to be a sensitive man with a vivid imagination.   This is best seen in ‘Stones’ which reveals that he has the ability to imagine each one of his collection of stones as “an impenetrable planet with tiny people locked inside “ This small poem in the middle of the sequence effectively  serves to enrich Arthurs’s personality.  He is not just a chirpy bus driver but a man with a quirky imagination. It is this ‘strangeness’ that his wife is attracted to because” it means he’s interesting”.

As with any life there are highs too, the most significant being Arthur’s romance and subsequent marriage to Charlotte, a refugee.  We see this woman open up his life by introducing him to her own culture.  A passionate and fulfilling love affair is revealed.  The poem ‘Wedding’ is reminiscent of a sepia photograph, showing a different world where “Blue-serged conductors make an arch of ticket machine”’.  With marriage come plans to sail around the world, evinced by ‘Charts’ with its extraordinarily detailed list of sailing paraphernalia.  However such happiness has the reader sensing that once again Arthur is heading for disappointment.

When tragedy strikes once more, in the poem ‘The School’,  it is again underplayed.  The explosion in the building and its effect upon Arthur’s wife are a blend of concrete images such as “she‘s in the air with all the glass” mixed with more abstract phrases “then the night rushes in, its crows awake’.  Such dark images suggest rather than sensationalise the full horror of the accident.

For me the most affecting poem was ‘Grief’, again Figura avoids sentimentality not only by restricting Arthur’s sorrow to a short poem but also by this striking image:

Arthur picks
at the dry snag
of skin on his thumb,
tears until
the whole of him is raw,

The sense of flaying conjured up here has the reader squirming;  it is the linguistic counterpart to nails down a black board, and helps us to understand the agony of the man’s grief.

I feel what helps Figura to avoid making these poems seem maudlin is his constant use of a gentle almost soothing voice.  This is shown particularly in the final poems of Arthur’s narrative.  Here Figura shows that even the most stoic individual can flounder and be overwhelmed by events.   ‘Body’ hints of a life where Arthur has become a “locked box of blood and gristle” for whom, in the poem  ‘Hut’,  his family home with its memories is “too much to bear”

The sequence ends with a prevailing sense of loneliness and self isolation.  At the end we are given the image of a man who has withdrawn from the world to sift “his collection of stones from hand to hand” and who, in his mind,  “sails his sacred upturned hut out off to sea”.

Arthur‘s narrative echoes the human condition in its blend of joy and sadness.  At times his stoicism and the thwarting of his dreams reminds me of the James Stewart character in It’s a Wonderful life.  However Figura’s world is not Capra’s, for this narrative is far more realistic.