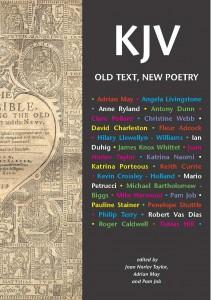 Wivenhoe in Essex has been called “the cultural capital of the Colne Estuary”.  This wry label may in fact somewhat underestimate the town’s fame for intellectual liveliness.   Certainly the community-based group poetrywivenhoe has acquired a well-deserved and widespread reputation for fostering local writers and for offering a welcoming and appreciative audience for poets from well beyond the borders of the county.

The spirit of enthusiasm and initiative that has helped poetrywivenhoe to flourish is also evident in the story behind  KJV Old Text – New Poetry (Wivenbooks, 2011).  We learn from the book’s introductory remarks that three poetrywivenhoe members – Jane Norlev Taylor, Adrian May & Pam Job – took a decision in early 2011 to compile an anthology of contemporary poetry responding to the four-hundredth anniversary of the King James Version of the Bible.   Together with their local publisher, Wivenbooks, they determined to allow only six months for commissioning and selecting poems and then designing and producing the finished book.  With such a time scale, one might be forgiven for expecting this community-based project to result in a “worthy” but somewhat amateurish production, mainly of interest to local readers.  But such expectation could not be more wrong.

KJV Old Text – New Poetry is no stapled pamphlet into which poems have been squeezed to save pages.  On the contrary it is perfect-bound and beautifully designed (by Catherine Dodds).  It contains some fifty poems by about 25 poets on around 140 pages.   Each poem is preceded by the passage from the KJV on which it is based; and all text is given plenty of room to breathe.  This is, very largely, an anthology of new work, only about ten of the poems having been published before in any form; and it is, moreover, new work by such well-regarded poets as Fleur Adcock, Ian Duhig and Penelope Shuttle.

The poems are arranged in the order of the Biblical texts they refer to – from Mario Petrucci’s  ‘let us’, which responds to the creation story  in Genesis 2, to Joan Norlev Taylor’s  ‘Liverpool Street Apocalypse’ with its glimpses of Revelation 21’s new heaven and new earth.  This main sequence is elegantly bracketed fore and aft by poems about the craft of translation from Fleur Adcock and Katrina Porteous.  There is also a final cheerful footnote from Mike Harwood, ‘Battle of the Acronyms’, which manages to tuck the KJV in with such unlikely bedfellows as KPMG and the KGB.

Having established that KJV Old Text – New Poetry is a remarkably attractive and well put-together volume, what can we say in more detail about its contents?  We can say first of all, that the contents are surprisingly consistent as to quality.  As to form, mood and subject they are unsurprisingly varied, given the number of poets who have contributed.

The anthology’s poetic form ranges from Mario Petrucci’s three modernist pieces to the punning rhymes of Adrian May’s ‘Noah Naked and Pissed’.  The spectrum of moods includes the gently dry and subversive tone of Philip Terry’s  ‘Jonah and the Whale’: On the first day / Jonah sat in the / Darkness thinking / Here I am safe / From the Lord. / And I have / Plenty to eat / Even if I am not / Fond of krill.  But it also encompasses tough and troubling poems like Katrina Naomi’s ‘Jacket’ with its hints that faith needs to visit places even darker than Psalm 23’s valley of the shadow of death: they are gentle as they strap between my legs / pull tight across my chest.  I fold my arms / to keep the lines clean.

The poems deal with many kinds of subject-matter – not necessarily from an orthodox Christian viewpoint.  Some poets opt for an imaginative re-telling of a Bible story in a modern voice. Christine Webb provides a wonderfully exasperated monologue for Martha: That lamb / (in a herb crust) doesn’t exactly cook / itself; and Michael Bartholomew-Biggs gives at least one of the disciples a Yorkshire accent in ‘Dawn catch’: Pete’s the first one to admit he can’t / be doing with it.   Sometimes the poems speculate about happenings beyond the end of the official story – as in Keith Currie’s ‘Cain’s homecoming’: And would you kill the fatted calf for me, / my children’s children’s children?  Adrian May is one of several poets who construct a modern analogue of a familiar Bible story:  his poem ‘Sacrificing children’ gives voice to a childless couple – in the offering of Isaac / the child is in us, / and those we never had / my love.

It is of course the language of the KJV, with all its rhythms and memorable phrases, that has most consistently been singled out for praise during this year’s anniversary celebrations.  Even those who may not be greatly impressed by the Bible’s ideas and teachings can find positive things to say about the KJV’s influence on English literature.  Some of the poets in this anthology seek to weave the KJV’s distinctive rhetoric into their work. ‘In the Land of Uz’ sets up a dialogue between the contemporary words of Pam Job and the language of the book of Job as rendered in seventeenth century English:

The bottles of heaven are emptied into waterspouts
sucking in ships to sail on the ocean floor.

Robert Vas Dias, in ‘Waves’ allows his own eloquently descriptive lines finally to be overtaken by the KJV’s apocalyptic tones:

… tsunami nightmare,
lofting houses off foundations,
cars, boats, bodies tossed
in black waters, reduced
to debris, upon the earth,
distress of nations, with perplexity;
the sea and the waves roaring.

David Charleston makes a wry contrast between the language of 1611 and 2011, mentioning the priest who regrets we’ve lost all sense of symbols but is also

… happy himself  to mangle
the language of the 23rd Psalm
with The LORD is my shepherd.
There is nothing I shall want.
(‘At the Baptism’)

It would not be a troublesome task for me to cast around and provide further striking quotes from the other dozen or so poets I have not yet mentioned.  But an even better course of action is for me to encourage you to seek out a copy of this excellent book and make your own list of favourite verses.  The collection is well-suited for browsing and dipping-in: but it does also provide a pretty good birds-eye view of the Bible as a whole.  While the great majority of the poems are based on the New Testament – and the four  gospels in particular – the Old Testament is also well represented.  After the gospels, the book of Genesis attracts most attention because of its rich fund of stories from creation onwards.   Strangely enough, however, the poetry of the psalms provides inspiration for only two or three of the contributors.  Perhaps there was a feeling that it is hard to compete with the original!  The legalistic strictures of Leviticus and the complex theology of Paul’s epistles do not seem to have excited the imagination of many poets either.  But most of the books of the Bible do get at least a mention – the mysterious metaphors of the prophets, the drama of the book of Revelation, the erotics of the Song of Solomon.   Until about the middle of the last century it could reasonably be assumed that most people in Britain would have had a fair knowledge of the contents of the Bible (whether or not they actually believed it).  Nowadays such an easy assumption seems more questionable; and this anthology may help to re-acquaint its readers with what is really inside the Book that has been so much talked about in 2011.