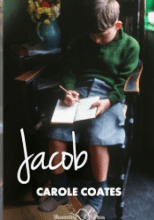 The Contents page with its list of titles might suggest that this is a conventional ‘collection’ of poems but that would be a misreading. Jacob is a narrative sequence, using the shifts in perspective within each poem to show how Jacob grows up, through the pace of pain, awkwardness, pleasure, incomprehension, acceptance, anger, the sourness of school. The reader watches, as from the inside, as a boy learns how members of his family fit – or might fit – together: their differences, their strengths and weaknesses. There is no explanation; everything just is, in the way that in childhood we take for granted the family we are born into, whatever it’s like. Questions might come later; there might, with luck, be answers, but these we will have to deduce. Coates understands the unevenness of growing up, those lurching emotions that follow no predetermined pattern, the way childhood perceptions are patchy and how this unique mix of understanding and guesswork continues to exert its influence on family relationships. She can see the chaos of detail that is family life when some elements are unspoken, disconnected; she takes the reader straight into Jacob’s view of a disordered world that is his only world.

Six unequal sections cover Jacob’s life, from birth (in 1948) to 2003, the year his mother dies. It’s a biography of emotions not of facts – and this is important to the structure: once Jacob has reached his late teens the reader is left to join up hints to create a possible map of his adult life. And isn’t that how it happens when we live in the middle of our own lives? Coates’ empathy with the wide-eyed, curious child places us, with him, in the centre.

His mother’s instability is there from the opening poem, where they are together in the garden, Jacob hiding in play while his mother calls

Only a hint of control, her speech direct, as in later poems, but we see Jacob’s view of her –

It’s clear picture in a child’s voice; it’s the voice that Coates will allow to grow with the poems, the child’s-eye-view of a complex and sometimes dysfunctional world – but the only world he has. In ‘His people his place’ Coates gives a list of those people inside: Grandmother boiling a pig’s head in a black pot; Aunt Felicity banging her feet as the sewing machine makes a red dress; Mother putting her shoes in paper bags where all are equal and all activities are equal – and outside: Mr Foyle raking grass he likes bonfires better than digging, and the black coalman with his thundering sack. Beyond the garden lies the town, and a child’s view of bomb damage when he does not have the words for war –

Here Coates let the spacing do the work of stumbling language, just as she shows, after Jacob has met Edna/Teddy (his cousin) who moves in with them, how the tightness of questions are bottled up within his body –

Jacob grows and the details grow with him: Five Boys Chocolate bars, The Golden Egg chain, Quink Permanent Blue, Woolworths. School homework is shown by the scraps of detail and quotation running through his mind in parallel with sexual arousal and being mocked as the man made of books. Then a relationship with Edna/Terry, now an art student (His funny cousin) –

Their shared past and family unites them, along with their need to escape –

The final poem (‘He can do it all’) of the young-man section shows Jacob on a bus in Brighton and, with a very light touch, brings together the literary knowledge embedded in him and the future opening out before him –

This was August 1967; from the dates I calculate Jacob as nineteen. The next and final section jumps to 2003. Jacob is fifty-five, and all we know of the intervening thirty-six years comes from asides in the final poem ‘After she dies’ and from conversation with his wife as they try to make some sort of sense of the house his mother had died in.

And what has his life been? There’s the material side – Cambridge, a significant salary, the second home on Westray, all slipped as with seeming-casual reference – but it’s the relationship with his mother that matters most, and all his unanswered questions. It’s a fine concluding poem: yes, we ‘see’ the house, the mess, all the muddle of mother/son love and conflict, but underneath, gnawing at the reader, are the personal, private questions about how much this might reflect our own lives. Only a poet in perfect control of her material can achieve this, a fully inhabited narrative that is also, ultimately, a mirror. In Jacob the form and content are a unity and choosing quotations to give the best account of Coates’ distinctive style has been difficult: every line and every twist of perspective is quotable.

There was an early glimpse of this sequence when Coates won the Nottingham Open Poetry Competition in 2011 with one of these poems (‘Reading’). Good as it is, it gave only a small indication of the strength of writing shown in the full collection. With generosity she has dedicated this collection to the memory of Elizabeth Burns, a fellow poet who died last year. It’s a collection to be read uninterrupted, at one sitting, from the first page to the last, and then re-read over again.