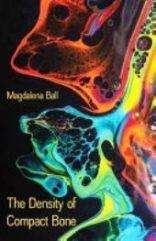 Poetry review – THE DENSITY OF COMPACT BONE : Charles Rammelkamp accompanies Magdalena Ball on a poetic exploration of the nature of time

Magdalena Ball’s overriding theme in The Density of Compact Bone is time. What is it? How does it work? What are its effects? Is it even real? Over and over again, contemplating the world, she runs into the conundrum of time, “time’s honey,” as she refers to it in the poem “soul clap”: sweet and sticky, trapping language and perception in its gummy swamp. Time is both an abstract concept and a monolithic force. It’s behind extinction, annihilation, memory, age. It’s also an illusion. She writes in the poem “Time is Not”:

“Tomorrow’s Box is Quantum” is another take on time, regarded in its smallest possible unit. “Every day is another chance to die of kindness / the infinite regression of immortality.”

“Nobody’s Ancestor” starts, “Time does not resolve. It takes flight, out of the forest, lifting.” The poem ponders succession through time, the “chain of origin, linked like leg / irons, pulling you back to the elements.” But time doesn’t provide an answer to the riddle. The poem concludes:

A whole section of poems is called “Chronon,” which is a discrete unit of time that is part of an hypothesis that proposes that time is not continuous. This is a view already anticipated in “Tomorrow’s Box is Quantum,” which puts a spotlight on the theme. Ball writes in the first poem of this section, “Eastern Whipbird,” “that time is a construct.” Later in the Chronon section, in “Symmetry Breaking,” she writes:

“Life can only be understood backwards” takes on memory and time in focusing on a war veteran, suffering from PTSD, occasionally moved by rage, “who knows / everything heals after enough time.”

In one of the final poems in the collection, “Hall of Mirrors,” a memory poem about an old flame, Ball writes, “We know time isn’t a straight line. / It twists back on itself, bending limbs / thickening in the veins…”

While all of this is thought-provoking and vividly written, what are the practical implications? The very first section of the book, “The Age of Waste,” spells out the bleak consequences. In poems like “AKA” and “Qi Qi, the Endling,” Ball mourns the extinction of species, all the result of human activity. An “endling” is the last known individual of a species – “Her name is Mud / last of her kind,” is how Ball starts “AKA,” and in the catalogue of lost fish, reptiles, and lizards, in “Qi Qi, the Endling,” she lists Martha, last of the once ubiquitous passenger pigeons, “hunted from hero to zero in fifty years” – clearly a victim of human rapacity.

“Is Blue an Earth Tone?” further explains the situation, our planet Earth “melting / under the hot weight of humanity / bearing down.”

The poem “Wing Feathers” alludes to an individual with a colossal sense of entitlement (Donald Trump comes to my mind), but its very shape visually suggests the shameful diminishment caused by humans.

Is there any sense of redemption in all this? Magdalena Ball’s does not sound like a woe-is-me (vey ist mir) voice. Far from it. Yes, “nothing lasts,” as she concludes the poem, “Passerine,” but given the yo-yo that is time, nothing is inevitable, either. “I try to be sad, but all I feel / is desire,” she writes in “Rhythmic Oscillations,” and the whole collection ends on a triumphant note in the poem, “Mitzvah”:

My absolute favorite poem in The Density of Compact Bone? The tribute to William Butler Yeats, at his graveside, in “Drumcliff Church.” The poem ends where the entire collection begins, philosophically – with time:

This is a collection to be read and then read again.