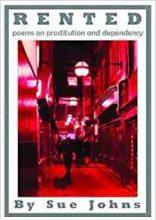 The first thing that strikes the reader of Rented is Camilla Reeve’s cover design. This includes a photo, cast in dark red, of a crowded lane typical of what is often referred to as the ‘red light area’. The opening poem then reminds us, if we needed it, that prostitution has been around pretty much forever, referencing as it does “my sisters of the past”. It also tells us that men of every background who can afford to pay, even priests, use these services before all but the priests return to “their cold and tidy wives”.

With the scene set, Johns then takes the reader on a journey through different times and cultures, illustrating just how damaging the world of prostitution can be to both clients and workers, corrupting everyone involved by selling them the myth of a ‘service’ given and paid for just like any other business transaction.

In ‘Floralia’, a poem named after the Roman festival, riotous sex is almost celebrated as the words bid participants “Dance! Fornicate!” In total contrast, the next poem ‘Stag’ (the one I would choose as the stand-out poem of the collection) paints a stark picture of the male ritual of the stag night, particularly ones that include “an early wedding present” in the form of sex with a prostitute. The woman our stag chooses gives herself, her “body is a blasphemy”, making a mockery of the vows the man is about to take. Johns successfully ridicules the idea that a man can have this last act of debauchery before committing to marriage, as if it is his right and somehow acceptable.

There follows an interesting trilogy of poems all containing the word ‘promise’. In ‘Watching Promise’, Johns draws the vivid connection between “a filthy finger nail” and visits made to “the prissy chemist” for medication to treat “a gift left by a client”. The poem also references in no uncertain terms “the hand-jobs we give, off the kerb, ending in a heavy spurt”.

Other poems hint at a range of familiar ideas: Mary Magdalene and her reputation as a prostitute who washes the feet of Jesus and dries them with her hair; the heavy use of drugs by sex workers; and the fact giving sex in return for money can be a means to an end that even finances a fancy lifestyle.

In ‘The Dancer’s Choice’ there is the graphic reminder that prostitutes can fall pregnant and have to count “the weeks squeezed in a costume” until there’s the opportunity of “getting it fixed”. Here Johns uses the lexicon of dance to great effect in describing the various stages needed to acquire and achieve a backstreet abortion.

Throughout the book we are shown men abusing servants, men who enjoy a preferred prostitute, men with fetishes. We are also told of many religions and cultures ignoring the ‘sin’ and almost condoning sex as something men have a right to get by any means. There are other poems too, such as ‘Speed Walking with Baby’, where it is clear life moves “to the beat of a father’s footsteps” and not always in tune with the requirements of women.

In ‘The Road’ Johns charts the many objects, animals and even people who have fallen foul of speeding drivers. Amongst the awful statistics she hides:

Yes, the loss of a brother occurs before “speed restrictions and time had done their taming.” Like the poor creatures killed on this road, blink and you could miss such a profound and devastating loss.

In tackling this book I was anticipating a candid, maybe difficult, read, perhaps informed by personal experience or by the poet spending time with prostitutes. The writing is certainly the former but nowhere are we given any explanation as to why Johns wrote these poems or how they were researched, and I think this is a great shame. Nevertheless, the poems are well-crafted and deal with a range of humiliating and disempowering realities associated with selling sex. We get heels and hips, moans and madams, pimps and physical abuse, all of which make for a compelling peep into an often hidden and misunderstood world.

Everyone You Hate Is Going to Die, by Daniel Sloss. Review by Barbara Lewis. Meeting my grandmothers: examples for life. Carla Scarano D’Antonio.